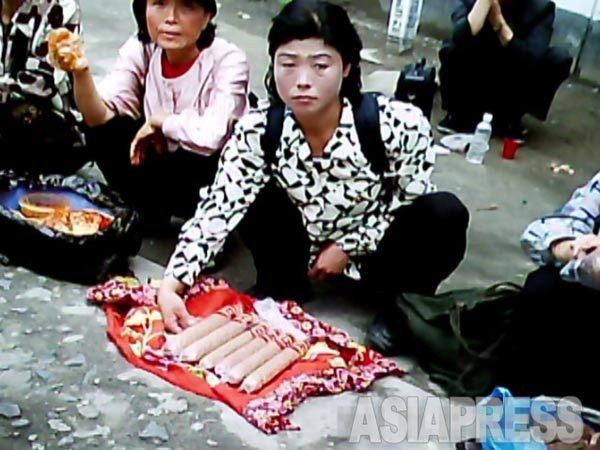 (file photo) A woman selling Chinese-made sausages on the streets in front of a downtown Pyongyang apartment building. Photographed in the Peony District in July 2011 by Koo Kwang-ho

Since the Kim Jong-un regime blocked the Chinese border in late January to prevent the spread of the coronavirus, daily necessities and groceries produced in China have not made it to markets, causing significant disruption to residents’ lives. The authorities are currently emphasizing localization through “self-regeneration” as a solution to the problem but, with the quality of domestically-produced food so low, the campaign has caused frustration and led to further problems.

“The markets have ran out of Chinese products so they are selling domestically-produced foods at state-run stores and markets. However, there have been a number of people who have suffered stomach pain as a result of spoiled and moldy products. The frequent need for refunds and exchanges has created a lot of friction,” a reporting partner from North Hamkyung Province explained to ASIAPRESS on May 14.

In North Korea’s markets for daily goods, Chinese-made products have dominated shelves since the late 1990’s, with goods ranging from clothing to sundries, fruit, and food. The economic crisis, which paralyzed production at the turn of the century, brought the introduction of cheap products from neighboring China to North Korea’s markets, where they have since had much success.

Since the late 2000’s, however, there has been a perception among North Korean consumers that “food imports from China are unhealthy due to their low quality.” As such, Chinese food products were distrusted.

North Korean consumers held domestically-produced food in higher regard and items such as bread, snacks, dried noodles, and beverages competed well with Chinese products at the market.

With trade with China currently suspended, one might imagine that there is a golden opportunity for domestic food producers to gain a greater share of the market. In reality, however, an opposite effect has resulted from the halt in trade. This is due to the fact that domestically-produced food cannot be properly made without raw materials imported from China.

A reporting partner explained, “North Korean producers use raw materials from China such as preservatives, seasoning, and additives, etc. Because those products cannot be made here in North Korea, the snacks and bread currently being produced becomes moldy and spoils very quickly.”

In addition, as containers and other food packaging is produced with Chinese machines and raw materials imported from China, there are said to be major disruptions to domestic food production.
Next page :Conflicts with the authorities over “non-refundable” goods...