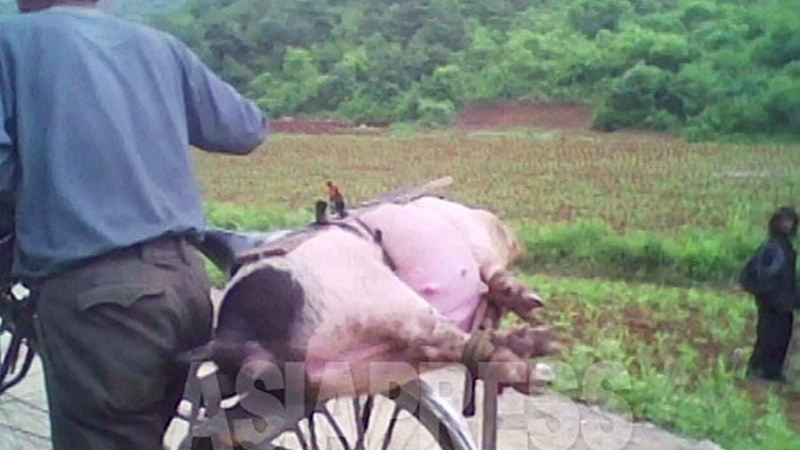 A North Korean transporting a pig on a bicycle. The pig’s legs are tied up, perhaps because it is still alive. This photo was taken by Kim Dong-chul in South Pyongan Province in June 2010. (ASIAPRESS)

Many North Korean city dwellers are raising goats, pigs and chickens in their homes. With a drastic fall in economic activity and cash income due to the continuing pandemic, many people have turned to raising domesticated animals to earn money. ASIAPRESS recently interviewed a female reporting partner living in the northern part of Ryanggang Province about this. (KANG Ji-Won)

―― What kind of domesticated animals are people raising?
Chickens are standard, and people also raise pigs, rabbits and goats. Goats produce milk, and people sell it for high prices. There are a lot of people who sell goat milk to earn money. Goats are a popular animal to raise, and there’s competition between people who raise them.

―― How do people feed the animals?
North Koreans don’t have enough food to eat themselves, so the hardest thing for them is to obtain feed for their animals. They feed pigs a mix of grass and human waste, and take goats outdoors to let them feed of weeds.

―― Do people sell the meat from the animals they raise?
No. They sell adult animals that are still alive. People don’t have much income anymore, so everyone is taking great pains to raise the animals. The economy is bad, and the only remaining active market is in selling domesticated animals.

Anyone can raise domesticated animals, so the price of meat has fallen about. Sometimes people even trade the animals for rice. It’s hard for even me to keep track of what’s going on with all the changes.

Below are market prices for meat in two cities in North Korea. After the North Korean government acknowledged the outbreak of COVID-19 on May 12, the authorities implemented tight restrictions on travel between cities, which led to immense instability in market prices. As a result, the prices below reflect those collected in mid-April. All the products listed are domestically produced. Apart from chicken, is which is counted by the head, all prices are per kilogram. The currency in the table is North Korean won. At the time of the price survey, 1,000 North Korean won equaled 0.154 US dollars.

＜Related Article＞
Facebook Twitter はてブ Pocket Feedly
RECOMMENDATIONS
＜Inside N. Korea＞ High Class: 5 Students Arrested for Smoking Meth at School
In North Korea, the rampant use of stimulant drugs is a serious proble...
Kim Jong-un has started to make nuclear threats. Did he learn this from Putin’s strategy of escalation? What he’s protecting as his people starve...(ISHIMARU Jiro)
Putin is a frightening dictator. Over the past 60 days, the world has...
＜Inside N. Korea＞ Expansion of the market economy as the driving force behind social transformation--based on sources from inside N.Korea. (PART4) Marketization leads to rapid development of the transport system. by ISHIMARU Jiro
2016/Dec/22 3-2 The emergence of a marketized transport system The ma...
Nationwide “Compost Battle” Begins Again: Cash-Strapped Regime Continues Missile Testing While Forcing Citizens to Collect Feces for Farm Use. ISHIMARU Jiro
North Korea’s annual "manure battle" has begun. This “battle” involve...
＜Inside N. Korea＞ 'Crowd trials' carried out nationwide
2018/Jul/19 It has been reported that "crowd trials" (public trials),...
＜Inside N. Korea＞ Not So Special: Kim Jong-un’s Unused Tourist Zone in Samjiyon is Falling Apart
More and more issues are plaguing Kim Jong-un’s priority project in R...