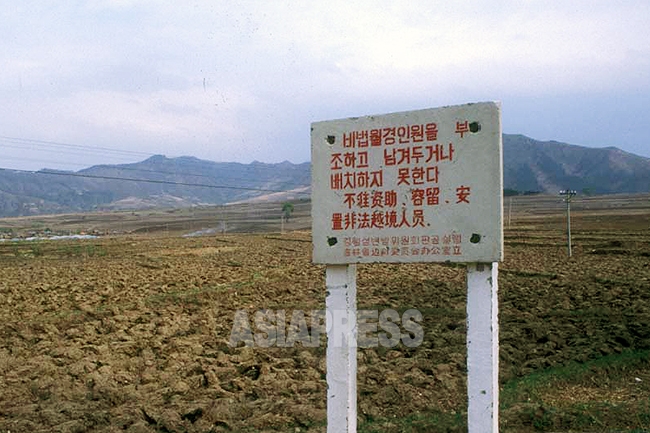 “No one who helps people illegally crossing the border will be left alone.” Following the dramatic rise in defector-refugees, these signs were put up on roads in areas along the border. (Taken by ISHIMARU Jiro in China’s Yanbian Korean Autonomous Prefecture in August 1997)

Meanwhile, there was a dramatic rise in South Korea-based defectors using their financial resources to secure the defections of family members. Brokers in China would take the relatives all the way to Kunming, where other brokers would take them to Thailand via Laos or other countries. Crossing over the border to China had become more difficult, yet there has been a rise in defectors who entered South Korea. This was possible because of a drastic rise in the number of defectors who entered South Korea from China.

I’d also like to mention here about another route taken by defectors. Apart from those who enter South Korea directly from North Korea on fishing boats, there are defectors who apply for asylum while legally residing in a foreign country. I reckon, however, that only around 1-2% of all defectors actually do this. These asylum seekers include workers, trading company employees, and diplomats deployed in China and Russia. There have even been cases where soldiers have crossed the MDL to make into South Korea. In November 2017, a North Korean soldier working in the JSA succeeded in defecting despite being fired upon. Based on my own research, however, only nine of these cases have occurred since Kim Jong Un gained power in 2012. (To be continued in the next installment >> )

Born in Osaka in 1962, Ishimaru has made three trips into North Korea and 100 trips to the China-North Korea border region since 1993. He has interviewed over 1,000 North Koreans and maintains and develops a reporting network inside the country. His works include “North Korean Refugees,” “Kodansha,” “Jun Returns to North Korea,” and the “NHK Hi-Vision Special Feature.”

fa-arrow-circle-right＜Special Feature＞ Escaping N.Korea…History and Present State(2) Defectors have become a threat to the regime…Around 200 live in Japan ISHIMARU Jiro