Hyesan City, as photographed from China in May 2014 by ASIAPRESS

A fire broke out in an apartment building on the afternoon of March 9 in Hyesan, North Yanggang Province. As elections for the Supreme People’s Assembly were to be held the very next day, an investigation has been launched to determine if the cause was arson.

According to a local reporting partner, who spoke with ASIAPRESS on March 13, the fire broke out in the Yeonbong 2-dong area of Hyesan, where many poor people live. Due to the neighborhood’s narrow streets, the fire brigade had difficulty accessing the fire and, as a result, the apartment building was burned down. Fortunately, however, all residents were evacuated and no casualties were reported.

“It seems that the poor residents were only able to get out with what they could carry,” said the reporting partner.

The Hyesan City government (People’s Committee) hurriedly instructed through its district offices for residents to come together to support those affected by the fire. As of March 13, however, very few aid materials had been collected.

Local police are currently investigating the cause of the fire. As the blaze occurred at such a politically sensitive time- just one day before important elections- it is said that the authorities are looking into the possibility of arson besides short-circuiting or other such accidents. (Kang Ji-won)

※ASIAPRESS contacts its partners through phones smuggled in from China. 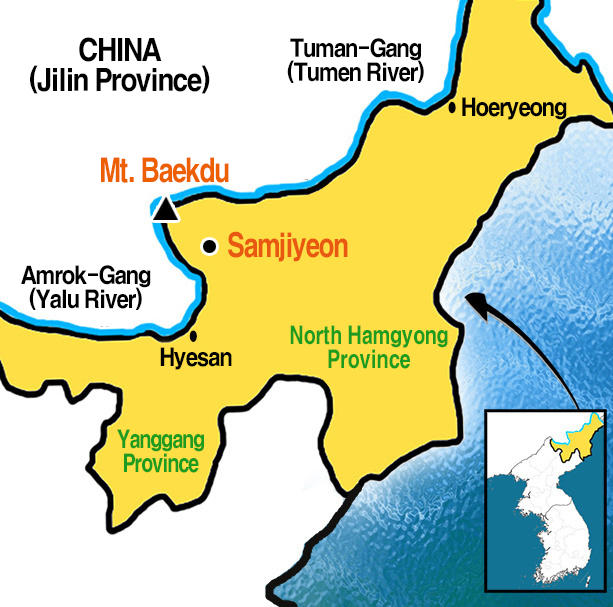 Hyesan is a large city on the North Korean border with China. Map produced by ASIAPRESS

Facebook Twitter はてブ Pocket Feedly
RECOMMENDATIONS
＜N.Korea photo report＞A Look at North Korea's Impoverished Rural Women (3) "I hate farmers" ... blatant marriage discrimination
◆Women don’t marry men from farms I often ask this question when I hav...
The Spread of "Impure Recordings" Lead to Executions in Hyesan and Chongjin City
2013/Dec/05 Written by ISHIMARU Jiro Across North Korea, from the end ...
＜Inside N. Korea＞ New Year, Same Problems: Regime Stresses Mental Rearmament, not to Succumb to Economic Blockade
For the first time since Kim Jong-un took power, the regime has not br...
＜Inside N.Korea＞Execution of Border Guard Officer Accused of Overlooking Defectors
On April 4, a reporting partner of ASIAPRESS, in a northern area of No...
The Purge of Jang Song-taek - "Self-Criticism" Campaign Launched
2013/December/11 Written by PAEK Chang-ryong, a defector reporter. Rec...
Farmers Starve in N.Korea - Excessive Seizure of Rice For The Military Exacerbates The Rural Food Shortage
2014/April/22 Written by PAEK Chang-ryong, a defector reporterFirst Se...
＜Inside N. Korea＞ Expansion of the market economy as the driving force behind social transformation--based on sources from inside N.Korea. (PART3) State-owned transportation is in a miserable state. by Jiro Ishimaru
2016/Dec/21  ◆ Transportation and traffic have greatly increased and ...
＜Inside N. Korea＞ Critical Condition: Bank Begins Disinfecting Bills as Coronavirus Causes Local Currency to Sink and Prices to Soar
North Korean authorities reportedly ordered the central bank to begin ...
Attempted Bombing of Kim Jong-suk Statue in Hoeryong
2014/May/16 Written by PAEK Chang-ryong, a defector reporterCity on hi...
The Rice Riddle: How Are Grain Prices Remaining Stable as N. Korea Faces a Humanitarian Crisis?
North Korea is running out of food. The Kim Jong-un regime requested o...