Peddlers holding up the state economy system
"We can no longer rely on the state system."
This is the message at the heart of knowledge acquired by North Korean citizens through experiencing the collapse of the state-planned economy in the 1990s. During the course of the breakdown of North Korean society, including the state rationing system, people were obliged to find their own way without relying on the state. North Koreans could not even buy a kilogram of rice from their monthly salary, paid out in workplaces across the country.

Twenty years have passed since this time of severe hardships, since then economic circulation systems and nationwide networks have emerged spontaneously from the social demands. This is apparent in the increase in the number of people finding their own ways to live by engaging in private business and trade. One of the items that best represents the business activities of the North Korean people is the oversize backpack. 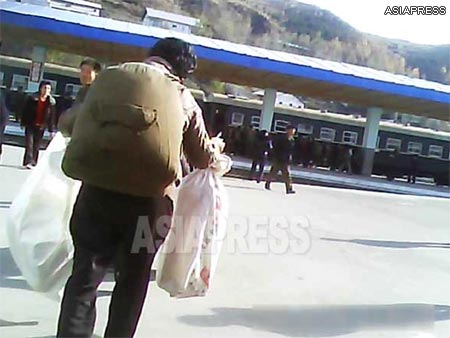 A woman with a backpack hurries to catch the train. She runs towards the station while humping a pack bursting at the seams, and bags in each of her hands. (Taken in a northern border city of North Korea. October. 2013) ASIAPRESS

These large backpacks, that have become so visible on the sturdy backs of women around North Korea, can be seen everywhere in the country except for in the state run-media. It is common to see women humping full backpacks of more than 50kgs (=110 lbs) and, as with the woman in the photograph, carrying other luggage in both hands. 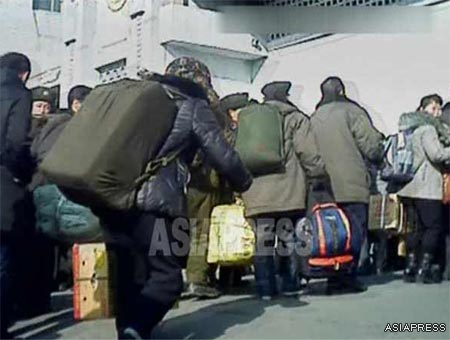 This over-sized capacity backpack is, we can say, a product of "Arduous March" that prevailed in the 1990s and was characterized by mass-starvation. The backpack, as well as bicycles, has become a necessary item for people to carry out private business. Many women have conquered the hardships of starvation and poverty by running around from city to city, village to village as a peddler with a pack strapped to their back. 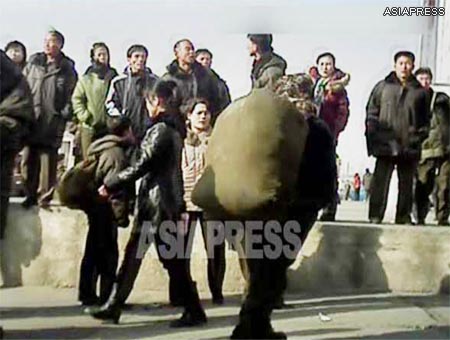 A woman, ostensibly a peddler, humping a huge khaki backpack. It is mostly women who engage in such informal business in North Korea. (Sinuiju Station, North Pyongan Province. November. 2012.) ASIAPRESS

It is most commonly women who are tasked with the role of carrying the hopes of their family on their backs. In North Korea, all men are principally obliged to attend the workplace, and if unauthorized absences are repeatedly recorded, heavy punishments are meted out, including time in a correctional facility known as a "Labor Training Troops". It is possible to circumvent this by bribing the workplace administrator, but in the workplaces, men are burdened with several obligations, including participating in military drills and supporting mobilization for farming collectives. The workplace functions as a social regimentation in North Korea. 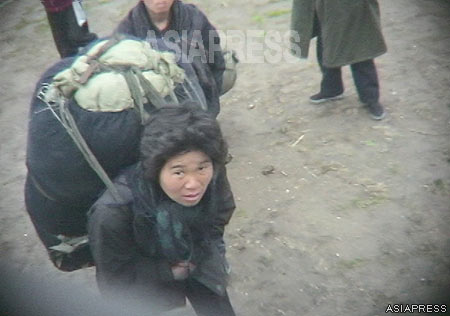 A woman with a backpack. (Photo taken by Lee Jun. April. 2005) ASIAPRESS

The other reason is that women are considered better suited for the trading business. There are frequent inspections and controls at checkpoints whenever people try to move to other areas, but most of the inspectors are men.

It is thought that women can avoid incarceration easier if they are apprehended without the correct documents, or questioned at the checkpoint. These women are very good at dealing with officers; they have experience in handling bribes and know how to get out of a pinch. Furthermore, in North Korea it is widely believed that men waste their money on drinking and smoking during travel, and are thus less able to make a good profit through the peddling business.

As of late there is a great deal of analysis expressing the belief that people's lives in North Korea are becoming more stable as a result of the development of the normalization of the peddling business. However, it should be remarked that this development is based on the sweat and tears of these female peddlers.

We should not forget that the North Korean economy is buoyed by peddlers crisscrossing North Korea with heavy loads on their backs. Their "Arduous March" has never ended.
***Rimjin-gang

Facebook Twitter はてブ Pocket Feedly
RECOMMENDATIONS
＜Inside N. Korea＞ Residents Begin to Panic as Border Shutdown Blocks Chinese Imports and Induces Inflation
◆ “If the blockade continues, there will be panic” In a bid to prevent...
Young Defectors Escapes to Japan to Be with Her Mother, 62 Years After the Start of the Repatriation Project to North Korea
On December 14, 62 years ago, the first ship of the "Repatriation Pro...
＜N. Korea Interview＞ "So the sanctions will continue?" North Koreans Face Disappointment as US Summit Breaks Down
◆“But we had been expecting the sanctions to be lifted…” On February 2...
＜Inside N. Korea＞ Crime and Suicide on the Rise as Border City Residents Face Starvation in Second 30-Day Lockdown
Hyesan, the central city of Ryanggang Province, was placed under lockd...
＜Inside N. Korea＞ “Who Would Be Next?”: Residents React as Rumors of Kim Jong-un’s Surgery Begin to Spread from the Border Regions
On April 21, reports of “Kim Jong-un undergoing heart surgery” and bre...
Rimjin-gang - N.Korean reporter, LEE Jun Story - ASIAPRESS
Many North Korean refugees live in hiding in the Chinese border city o...