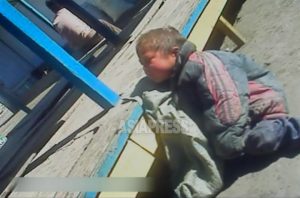 A boy–apparently, below ten years old–worn out at a market. He may be extremely hungry or exhausted. November 2012, in a suburb of Hyesan City, Ryanggang Province. Taken by an AISAPRESS reporting partner in Ryanggang Province (ASIAPRESS)

The North Korean state media has often announced that Kim Jong-un visited newly established large-scale orphanages in Pyongyang and Wonsan.  It has proudly portrayed his “love towards the children.”

Although the number has decreased under the Kim Jong-un regime, however, there are still “Kotchebi,” the Homeless, roaming around cities in all parts of North Korea. They turned into kotchebi because their parents were dead or had abandoned them due to their inability to take care of them.

A child kotchebi is born out of parents’ inability to raise him/her.  The majority of North Koreans makes a living out of small business.  Once unexpected problems occur–such as a disease, business failure, theft, and being arrested by the authority, it becomes extremely hard for them to make a living.

When everything goes wrong, people–both in Japan and North Korea– resort to committing crimes, doing a moonlight flit, and even committing suicide. In addition, people in North Korea easily end up as kotchebi–roaming around cities. It is because the majority of the people rely on the feeble foothold for a living, and the social welfare system is dysfunctional.
Related article: Kotchebi, the Homeless, Under the Kim Jong-un Regime (PART1) A girl and a boy–probably siblings–sleeping on a street 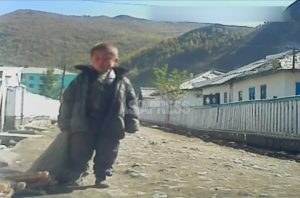 The boy at the previous picture dragging a big cloth bag. When the reporter asked about his parents, he shortly answered: “I don’t have.” November 2012, in a suburb of Hyesan City, Ryanggang Province. Taken by an AISAPRESS reporting partner in Ryanggang Province (ASIAPRESS) 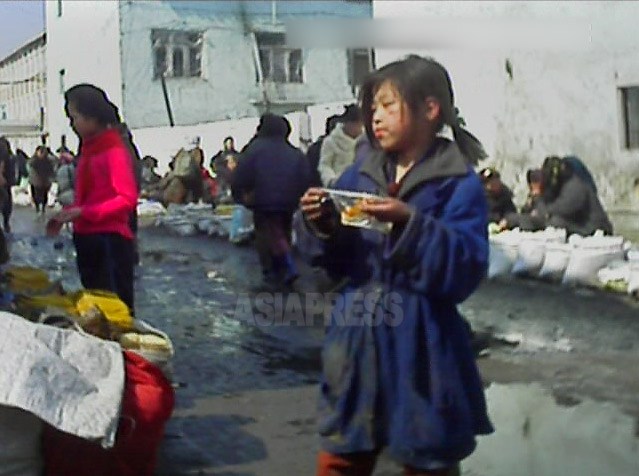 May she be hungry? A girl kotchibi is staring at food at a hawker stall. She is holding a plastic bag with a bit of food. March 2013, in Pyongson City, South Pyongan Province. Taken by ASIAPRESS.

Kim Jong-un should focus on re-building the social welfare system and allowing it people to have the freedom of market activity, not building large luxurious orphanages intended for propaganda use only.  (ISHIMARU Jiro)
Related article: [Video Report] The hidden homeless of Pyongyang 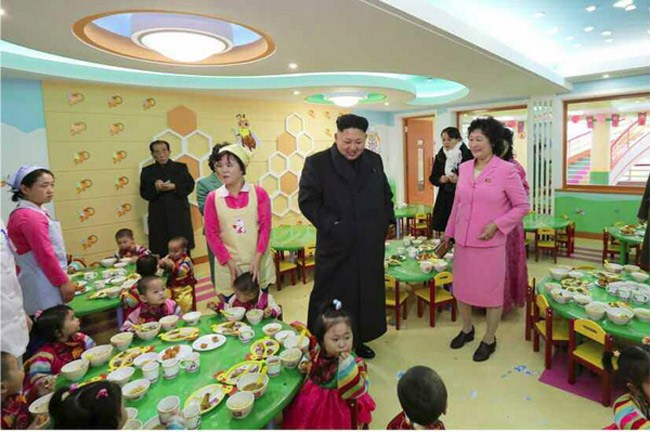 Kim Jong-un visited a newly established large-scale orphanage. The picture was at the front page of RodongSinmun on 2 January 2015.

Facebook Twitter はてブ Pocket Feedly
RECOMMENDATIONS
＜Interview with N.Korean People＞ Defection of Thae Yong-ho, the minister at NK mission in London, is “natural”
ASIA PRESS, amid of flow of news from South Korean media, covering th...
Death on the Yalu: Fatal Accident as State-Sponsored Smuggling Rises on Frozen River
As North Korean exports to China have faced great difficulties due to ...
＜Photo Report＞ Abandoned Elderly (PART5) The elderly Treated Useless in N.Korea, the Land of Courtesy toward the Elderly
2016/Nov/07 Koreans respect the elderly, and North Koreans were not a...
Rimjin-gang - N.Korean reporter, LEE Jun Story - ASIAPRESS
Many North Korean refugees live in hiding in the Chinese border city o...
＜Inside N. Korea＞ Expansion of the market economy as the driving force behind social transformation--based on sources from inside N.Korea. (PART2)  The black market and “farmer’s market” connect. by ISHIMARU Jiro
2016/Dec/20 ◆ How did the expansion of the market economy take place?...
N.Korea IT Report - PART2: Diffusion of South Korean Content Through Mobile phones
2015/July/20 Written by LEE Jin-su, Editor; Rimjin-gang and ISHIMARU J...
＜Inside N. Korea＞ Corrupt File: Police Crack Down on Chinese Drama Portraying Fall of Corrupt Qing Dynasty
In North Korea, a Chinese drama called “Nothing Gold Can Stay” is secr...
Rimjin-gang Report - Pyongyang Construction Sites to Build 100,000 Apartments (2011) North Korea
In the capital city Pyongyang, a fully-fledged construction boom has b...
＜Inside N. Korea＞ Distribution Distrust: Residents Wary of a Return to Rations after Huge Harvest Provides Potatoes to Whole Province
Amid news of poor rice and corn harvests across various parts of North...
＜Inside N. Korea＞ Penniless Protectors: Underfunded Orphanages Struggle to House N. Korea’s Homeless Children
It was not long ago when homeless children, known as ‘Kotjebi’, were a...