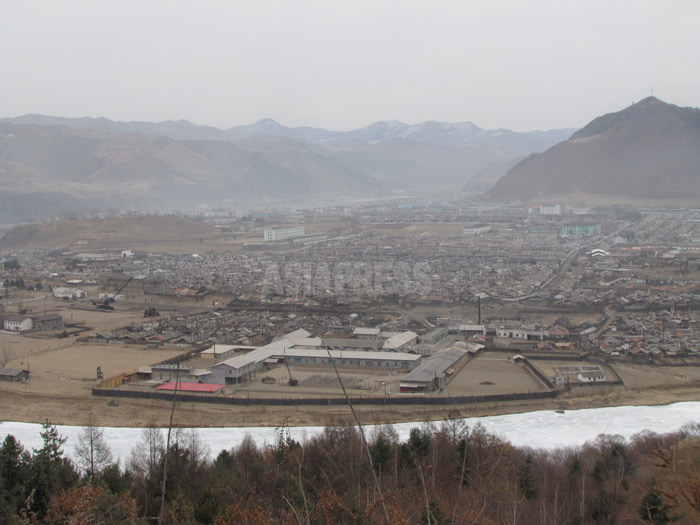 A picture of Musan, taken from the Chinese side of the border. An iron mine is located in a mountain to the left. November, 2012 ISHIMARU Jiro

■"I cannot eat and live"- Abandonment of Duty

Trade statistics and local evidence in China and Russia clearly demonstrate that North Korea's foreign currency imports have sharply decreased. What is important though is what kind of influence this is actually having in North Korea. Is the North Korean regime capable of enduring the sanctions? Or is Kim Jong-un’s regime being hit hard enough to be put under real pressure? Over the last year, our North Korean partners visited mines, trading companies, fisheries and markets to investigate.

From our partners’ observations, we can conclude that North Korean cities specializing in export-related industries are being hit the hardest. Meanwhile, the situation is rapidly deteriorating in other areas as well. In addition, the sanctions are also being felt strongly by those in Pyongyang and the military primarily responsible for maintaining the North Korean system. Lastly, the affluent elites of Pyongyang are also being hit.

Musan-gun, North Hamkyung, is a medium sized city facing the Tumen River with an estimated population of 100,000. During the Japanese colonial era, this city developed alongside the trade of iron ore.As trade with China expanded, iron ore became the country’s second highest export, bringing in $ 219.9 million in 2014 and $ 74.41 million in 2016. (Source: Global Trade Atlas 2017 edition).

As several Chinese companies had entered into joint ventures to mine in North Korea, the Chinese government expressed interest in 2013 in building a railway to cross the Tumen River. This interest has dropped, however, since iron ore exports have been completely cut off since the end of last year. Our partner living in Musan-gun gave us the following description of the local situation.

"We are mining a small amount to supply the domestic steel mills but they too are almost shut down. Cars aren’t being driven because there is no one has the money for gasoline. Workers' food rations have been suspended since March. Some of the workers have had no choice but to look for other jobs and to abandon their posts. 30 to 40 percent of workers just register their attendance before leaving work early.

The rising abandonment of duty is a major problem for the Kim Jong-un regime. In North Korea, adult males are assigned employment by the government. During the famine of the 1990s, when most workers at factories and companies lost their salaries and food rations, they were still required to go to work for political gatherings or service work. One of the most important instruments of the North Korean government’s control is organization through the workplace. To safeguard this mechanism of control, the security office checks workplace attendance sheets each morning. Those who are caught with many unauthorized absences are sent to the training camp, a short-term forced labor camp.

Next Page : Musan mine was one of the few large...

1 2 3
Facebook Twitter はてブ Pocket Feedly
RECOMMENDATIONS
Stimulant Drugs Take Root in the Daily Lives of the N.Korean People (PART3)
2013/October/25 Written by LEE Jin-su<< PREVIOUS (PART 2) The Hi...
The Handcart Porter Is Now an Indispensable Business
The Daily Life of North Koreans2014/April/05 Written by PAEK Chang-ryo...
＜Inside N. Korea＞ Tens of thousands of North Koreans mobilized for Samjiyeon construction project
Samjiyeon County, visited by President Moon Jae-in in September, was a...
＜Inside N. Korea＞ “No plan, No policies”: Residents Confounded and Critical after Kim Forgoes New Year Address
For the majority of North Koreans, the New Year kicks off with a tedio...
＜Emergency Interview on North Korea＞ A woman living in Hyesan City under lockdown, speaks in a painful voice: “If this continues, I will starve to death.”
Hyesan City in northern Ryanggang Province of about 200,000 people has...
＜Inside N.Korea＞ Why are North Korean Squid Boats Washing up on Japanese Shores?(3 Photos)
2017/Dec/28 Wooden fishing vessels, most likely from North Korea, are ...
[Video Report] The hidden homeless of Pyongyang
Pyongyang is a ‘staged city’, where outsiders are not privy to glimpse...
＜Inside N. Korea＞ Residents celebrate as Yanggang Province’s first traffic lights bring a stop to police extortion
◆Traffic police labeled ‘roadside thugs’ and 'caterpillars' In early D...
Official Decree - Redenomination - Currency Exchange
Redenomination : Official DecreeIn December 2009, an official decree w...
The Real Coronavirus Situation in North Korea (Part 2): Kim Jong-un Criticizes His Country’s Poor Quarantine System
Turn the clock back about 7 months to when Kim Jong-un made startling ...