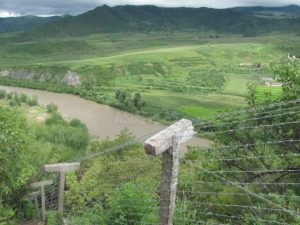 Barbed fence was installed even on the cliff at the Chinese side. Taken by Nam Jung-hak in August 2012 (ASIAPRESS)

It is said that the electricity was supplied to the barbed fence along the Tumen and the Yalu River amid tightly controlling and cracking down on illegal activities such as unauthorized cell phone communications at the border area. Reporting partners in Yanggang and North Hamkyung Province reported. (Kang Ji-won)

The reporting partner at the border area of Yanggang Province, using cell phone, reported forbidding atmosphere of the border on July 4: “Even no ant let loose around the border these days. As they supplied the power to the barbed fence, people sometimes were electrocuted and killed. It is said that a woman in Weeyon area lost her eardrum by the electrocution.”

On July 6, another reporting partner at the border area of North Hamkyung Province reported on recent installation of power on the barbed fence: “They say that you will be electrocuted even one meter away from the power supplied fence. They (the authorities) supply the power to the barbed fence, not to their people. Even though there is not enough electricity…” 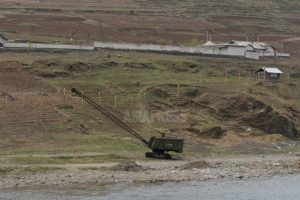 Poles are standing for installation of barbed fence along the Yalu River bank. Hyesan City area of Yanggang Province taken by ASIAPRESS from the China side in 2014.

China had completed the installation of the barbed fence along the Yalu and the Tumen River from 2012 to 2014. But, according to reporting partners, North Korea recently sent high voltage electricity to the fence after they completed the installation in the fall of 2016. However, it is not certain whether the electricity flows in all the fence along the Chino-North Korean border since it stretches to 1,400 km.

How can North Korea supply the electricity to the barbed fence on such a long border?

The reporting in Yanggang Province explains; the power produced in ‘Selected Youth Power Plant of Baekdu Mt’ in Baekam County was supplied to the fence at the border. On the contrary, a resident in Hoeryong City of North Hamkyung Province said “the electric power is supplied only for 3 – 4 hours a day to us these days.”

The reporting partners above all agree that defection and smuggling became almost impossible due to the electric fence. 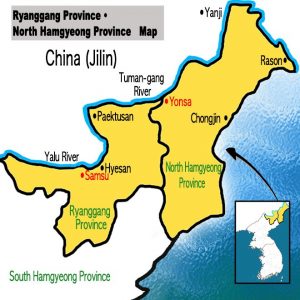 Facebook Twitter はてブ Pocket Feedly
RECOMMENDATIONS
＜Photo Report＞ People are exploited in mobilized for forced labor (1) Urban view
2015/11/6 The reason North Korea can still sustain production and cons...
＜Inside N. Korea＞ Kotchebi, the Homeless, Under the Kim Jong-un Regime
2016/Dec/2 “Kotchebi” is a North Korean word only. It is not in the K...
● Profiles of Our North Korean Reporters
(All the names our staff in North Korea are noms de plume.) Kim Dong-c...
＜PHOTO REPORT＞Sino - N.Korea Border: ［PART2］A Sign of Late Spring In the Border Town of Hyesan
2014/April/19 (This report first appeared in the Korean and Japanese e...
＜Inside N. Korea＞ Drastic Increase of Inmates at “Labor Training Camps”: “People Dying of Malnutrition and Physical Abuse”, a Former Inmate Testifies.
2016/Sept/18 As control over North Korean people has gotten tougher th...
＜Trump-Kim Jong-un Meeting＞ Cynical Citizens Told “Not to Fantasize” by Pessimistic Party Officials
◆ Lessons learned from the disappointing failure of Hanoi Kim Jong-un ...
To Be Honest, the People of N.Korea Couldn't Care Less
Rumours that "One Rocket Launch is Worth Three Years of Food" --- Kim ...
Forgotten Faces: What Happened to the Thousands who Happily Set Sail for North Korea?
Gazing down from the deck of the ship for a picture, some can be seen ...
N.Korean Reporter, LEE Jun story
Many North Korean refugees live in hiding in the Chinese border city o...
＜Interview With A Woman＞ North Koreans Weep Over Summit Meeting of Two Koreas
2018/May/18 The summit meeting between the South and the North at Panm...