On January 4 2020, South Korean broadcaster, KBS, released footage of a smuggling operation taking place at night. Incidentally, it was thanks to ASIAPRESS reporting partners in North Korea and China that KBS knew where to film the operation. 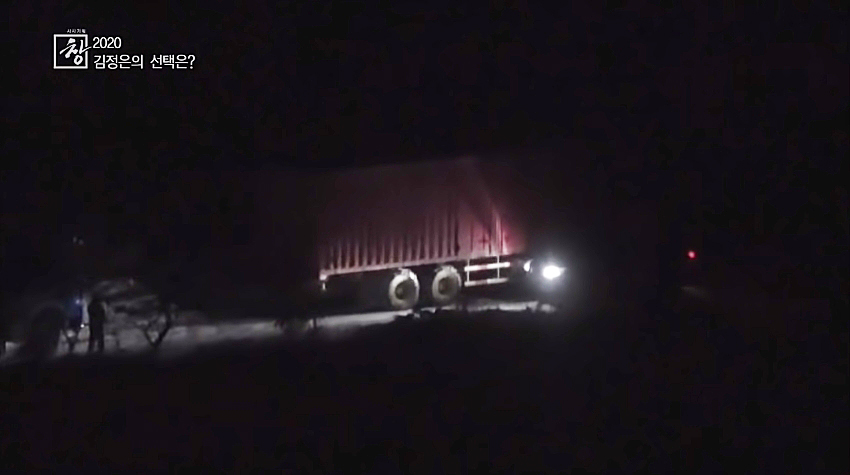 As the sun goes down, large trucks appear on the North Korean side of the river. On this day, it appeared that minerals were smuggled. Filmed in November 2019 by KBS

KBS originally filmed the smuggling operation in late November of last year. Following information provided by ASIAPRESS reporting partners, the film crew set up in a certain spot along the Chinese side of the Yalu River. As the sun went down, large dump trucks and freight vehicles gathered on the North Korean side of the river. As the Yalu River was still frozen over, a bulldozer was brought in to dig into the riverbank and create a ramp for the dump trucks to drive down.

Items designated for smuggling by state agencies change from time to time. It was said that the molybdenum minerals were the most commonly smuggled item last fall. Other popular contraband included dried shredded squid and seafood caught off the east coast. Imported from the Chinese side were buses, trucks, passenger cars, rebar, cement, and gasoline. 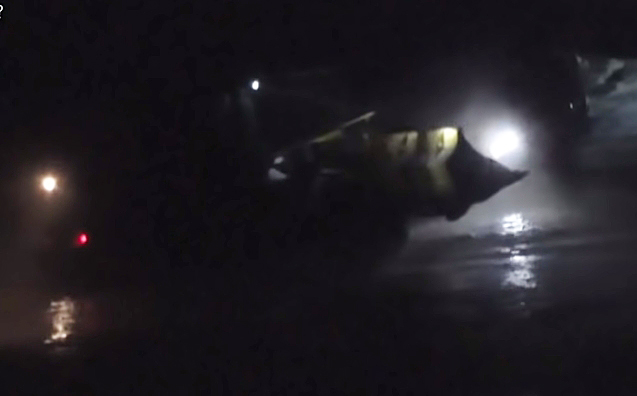 Bulldozers set to work clearing parts of the riverbank for trucks to drive down onto the frozen Yalu River. Filmed in November 2019 by KBS

A Chinese partner of ASIAPRESS spoke of his impression when conducting an investigation in August 2018, saying “It’s not just that the goods are not going through customs, it’s that everything is being smuggled. I’ve never seen such large-scale smuggling operations conducted entirely in the open. Many North Korean officials came to China to consult with Chinese businessmen. I think there were hundreds of them in all.”

Chinese authorities turn a blind eye to smuggling but are not directly involved. Border security, though still quite strict, seems to loosen or tighten the reins of the crackdown depending on current relations with North Korea or other international factors. Even when enforcement is relaxed, the amount of goods smuggled in this way is quite limited and the cost is high for both parties. Compared to regular trade, the smuggling operations are not efficient and profit margins are much lower.
Next page :Transshipments of coal...

Next Page： ■ Transshipments of coal
1 2 3 4
Facebook Twitter はてブ Pocket Feedly
RECOMMENDATIONS
Official Decree - Redenomination - Currency Exchange
Redenomination : Official DecreeIn December 2009, an official decree w...
Paying Off the Pigs: African Swine Fever Spreads as Peddlers Bribe Police to Sell Infected Pork
In South Korea, multiple cases of African swine fever (ASF) have been...
● The Making of Rimjin-gang
The Making of Rimjin-gang <01> The Making of Rimjin-gang The Ma...
＜Inside N. Korea＞ "It Was Trump’s Fault"... Regime Pushes Blame for Summit Breakdown Away From Kim Jong-un
◆ Still, nothing explained to citizens Since negotiations for denuclea...
＜Inside N. Korea＞ Major Factory Shuts Down as Workers Leave Following 6 Months of Unpaid Labor
In North Korea, where the economic downturn is worsening due to the Ch...
＜Inside N. Korea＞ Regime Strikes Gold: Authorities Lock Horns with Locals in Sudden Gold Rush
The discovery of large amounts of gold dust in a northern river is sai...