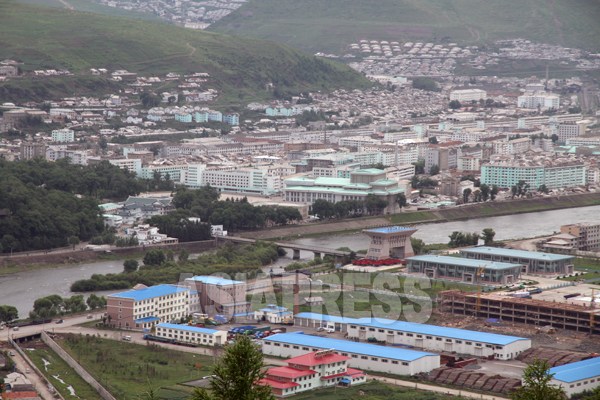 The upper reaches of the Yalu River became the hotspot for smuggling due to the narrowness of the river. Photograph of Hyesan City taken from across the river in Changbai County, Jilin Province, China in August 2013 by ASIAPRESS

On February 12, Kyodo News and Jiji Press reported, “From January to August of 2019, North Korea smuggled about 3.7 million tons of coal worth an estimated total of $370 million. About 2.8 million tons of coal, roughly 70% of the total, is believed to have been exported by transshipment between North Korean and Chinese vessels at sea. In addition, North Korea exported at least 1 million tons of sand, worth a total of $22 million to Chinese ports. The United States claimed that North Korea is, in turn, receiving imports of refined oil by transshipment. This amount is said to exceed the sanction resolution’s annual import cap of 500,000 barrels several times over.

It is hard to believe that petroleum refiners were not aware that 3.7 million tons of coal had been smuggled by transshipment. It would have taken a 10,000-ton cargo ship to make 370 voyages to receive all the coal. Cranes at the Chinese ports would have also taken considerable time to unload the coal after each transshipment. The scale of such an operation would have made it near impossible to avoid surveillance by satellites and aircraft. Video evidence of the transshipments, collected and released by Japan’s Self-Defense Forces, however, only shows hoses being used to transport liquid contraband between ships.

ASIAPRESS reporting partners in North Korea have conducted a number of investigations of large coal mines around South Pyongan Province and North Hamkyung Province. These local investigations, however, have shown that North Korea’s mines do not currently appear to be in full operation.

More information is needed to determine whether or not coal is being smuggled via transshipment at the scale suggested by the UN Sanctions Committee’s annual report.

Seafood is also said to be actively smuggled off the west coast of North Korea through transshipment. A Korean-Chinese resident of Donggang, China, 40 kilometers from Dandong, Liaoning Province, serves as an interpreter for ones of the ships involved in smuggling. According to him, seafood purchased at sea from North Korean fishing boats varies from season to season and ranges from shellfish to crabs to frozen, dried, or live fish.

To contact North Korean vessels at sea, Chinese ships use North Korean-made mobile phones provided by the North Koreans themselves. After meeting at sea or on a small island, the Chinese smugglers will check the quantity, quality, and price of the North Korean goods. According to the interpreter employed by the smugglers, the ship for which he worked was relatively large and had hired the services of 4 interpreters in total.

In 2018, shortly after seafood became subject to international sanctions, it was said that North Korean smugglers requested Chinese counterparts to provide South Korean-made cosmetics and clothing. Demand for these luxury items suddenly stopped in 2019, however, when they were made subject to a crackdown. Like “state smuggling” operations at the northern border, North Korean ships are also said to be supervised by customs officials, party officials, and security officials. This did not perturb the Korean-Chinese interpreter, however, who said, “I got close to the North Korean sailors and would drink and play games with them.”

It is hard to know the exact scale of the seafood smuggling but dozens of smugglers, large and small, are said to operate from Donggang. Freshly-caught seafood is said to be sold in markets and restaurants of Dandong and Shenyang, as well as distributed wholesale to various parts of China. However, according to the Korean-Chinese interpreter, transshipments of seafood have been stopped completely due to Chinese regulations and North Korean quarantine measures put in place to stop the spread of COVID-19. (ISHIMARU Jiro)

Part4 >>> ＜N. Korea Pro Report (Part 4)＞ How is N. Korea’s Economy Faring in the Face of the Coronavirus Pandemic and Continued Sanctions? A Look at the Exploitation of Women Working Overseas

1 2 3 4
Facebook Twitter はてブ Pocket Feedly
RECOMMENDATIONS
＜Inside N. Korea＞ High-ranking Officials and Public Largely Unaware of the Situation in Ukraine…What Lies Behind the Regime’s Silence?
While the Russian invasion of Ukraine has shaken the world and forced ...
Feuding Over Fuel: Regime’s Lifeline Under Threat as China Arrests Gasoline Smugglers
◆ Gas prices have stabilized- but why? North Korea has been subjected ...
＜Secretly Obtained N. Korean Documents＞ “People Approaching the Border will be Shot on Sight”...Police Notice Reveals Ruthless Coronavirus Measures
The fundamentals of the North Korean regime's countermeasures against ...
＜Urgent ＞ What is happening inside N.Korea with COVID-19？ The government heavily crackdown on hoarding and restrict movement to other areas
North Korean authorities officially acknowledged that the Omicron var...
Interview with a Trader from Pyongyang (PART2)
(Interviewed by ISHIMARU Jiro, editor in chief - Rimjin-gang) 2015/Mar...
＜Inside N. Korea＞ North Korea's border with China is under martial law
Nighttime curfews and road closures continue at 6 a.m. People complai...