It is becoming clearer that, following the tightening of restrictions by the North Korean state on various sectors of the society, the people's discontent is growing as their economic lives and general living conditions continue to worsen. These restrictions were imposed prior to and following the purge of former Vice Chairman of the National Defense Commission, Jang Song-thaek. These reports were passed to us from multiple sources in the northern part of North Korea, via phone conversations after 29 December. One of our reporting partners explained as follows:

"The state's restrictions on the people are ever-increasing. Everyone is fed up with these circumstances because they can not make a living in this situation. On the occasion of the second remembrance anniversary on 17 December (The national remembrance of Kim Jong-il's death), there were investigations into every recorded absence in workplaces. To investigate those who were absent from the event, the military and the State Security Department (intelligence service - secret police) are directly in charge. It seems, under the current situation, that the state intends to impose heavy restrictions on us. We feel like we are boxed in." 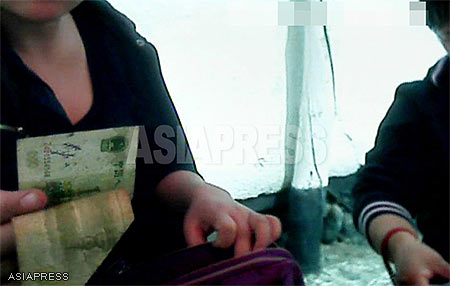 The picture is a captured image from the video footage taken in the northern city of North Korea. In the marketplace, the Chinese currency 'renminbi' is used, which is illegal according to the law. Our reporting partner told that the authorities are imposing strong measures to prohibit the use of Chinese renminbi and make frequent crackdowns, especially since last December. (October. 2013) ASIAPRESS

The tightening of the restrictions also casts a dark shadow over the people's economic lives. In many marketplaces in North Korea, Chinese currency is secretly used instead of the discredited currency, North Korean Won. However, since the end of last year, the authorities keep tight rein on the circulation of Chinese currency. The investigation and restriction on people's activities, known as the 'censorship' (검열) is also continuing. Our reporting partner said;

"The censorship carried out by the Party institutions and the Military Security Command Department (military intelligence institution) before the purge of Jang Song-thaek, has been extended. For those who engage in the censorship, it would be a lucrative job as they can receive more bribes (as compensation for overlooking the offenses) when they tighten the restrictions. But for ordinary people like us, it only means our daily life becomes harder." 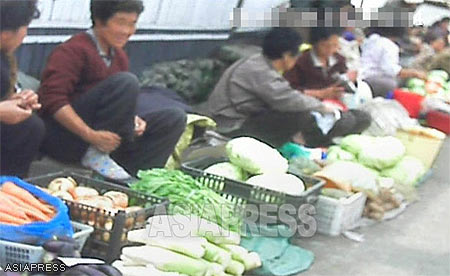 The picture taken in a city in the northern part of North Korea. Chinese renminbi is circulated in parallel to North Korean Won at the marketplace. (October. 2013)ASIAPRESS

As our partner explained, people are forced to live in an extremely tense situation. What the partner emphasizes is that the living conditions continue to worsen in every aspect. In the aftermath of the purge of Jang Song-thaek, there is an atmosphere of deep mistrust among the people. However, the partner adds that people with close relations share what they really think of their circumstances.

"All people express that they would escape to China if the emergency situation arises. Some of them say that the state is tightening the restrictions to prevent people escaping because when war breaks out, the country will become empty as everyone rushes to China. Usually we don't have the opportunity to talk about this kind of thing freely among ourselves because of censorship, but these days I hear many different voices. I think these words reflect the people's true feeling towards the authorities."
*** Rimjin-gang

Facebook Twitter はてブ Pocket Feedly
RECOMMENDATIONS
To Be Honest, the People of N.Korea Couldn't Care Less
Rumours that "One Rocket Launch is Worth Three Years of Food" --- Kim ...
＜Inside N. Korea＞ Massive increase in opium addicts leads to measures by the authorities as the drug is used to treat COVID-19 symptoms
ASIAPRESS has learned that the number of opium addicts in North Korea ...
＜Inside N. Korea＞ A Building Burden: Rising Discontent as Regime Extorts Resources from Residents to Support Tourist Site
◆ “Construct a Special Tourist Zone in the Sacred Birthplace of the Re...
＜Inside N. Korea＞ Why is Hunger Getting Worse in June? “Malnutrition has made it impossible to go to work, and some have died from eating wild plants”
The impoverishment of North Korean is getting worse. It has been 1 yea...
＜Inside N. Korea＞ A recent flood has left thousands dead: following the flood mass forced-migration of the poor into the affected area. 'Entire villages have disappeared. '
2016/Dec/1 Toward the end of August this year, 2016, a large flood oc...
[Video Report] N.Korean Kids on the Battle of Life
North Korean kids were forced to enter the battle of life since the ‘a...