First Secretary Kim Jong-un announced in his 2014 New Year Address that agriculture should be one of the most important agenda for the country.
"This year we should keep up agriculture as a major thrust of our effort in the struggle for economic construction and improving the people's standard of living, and concentrate all our efforts on farming".(2014 New Year Address)

He demonstrated his commitment to prioritizing the food issue by promoting the first-ever assembly for unit leaders of the farming collectives in February. However, in reality, the food situation has not improved and many farmers have been facing food shortages since March.

Food shortage in slack period of early spring - Not even potato skins
Our North Korean reporting partner who lives in a farming village in the northern part of the country brought us the following information via a phone conversation exchanged on 18th and 26th of March.

"Recently our farming collective completely ran out of food. Everybody is waiting to when the snow melts so they can dig beneath the soil to pull up frozen potatoes stored under the ground over the winter. But this year, there are many farmers who can't even get potato skins."

Why are farmers, the producers of food, starving? Our reporting partner explains it is because farmers did not receive the allocated amount of food last year and, in addition to this, the heavy harvest requisition by the government provoked the food shortage.

"Every time we looked around, our harvested rice was seized by the government in the name of military requisition. Making matters worse, the government created extra food allocations for workers in the cities. Collective farm workers have had no food allocation since last autumn's harvest. It has been a long time since the food ran out and now we can't find even find the skins of potatoes."

(NOTE: "allocation"; Institutionally in the farming collective, after the delivery to the government of a defined amount from the year's harvest, whatever remains is allocated for the farmers.) 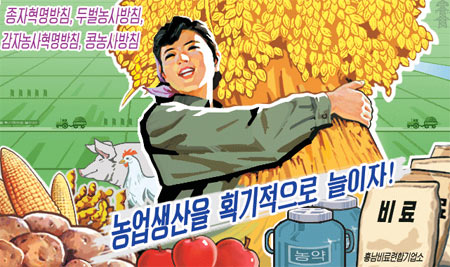 A North Korean propaganda poster issued in 2010 trumpets the state agricultural improvements with the slogan "Increase farming production!" through "The policy for the seed revolution, double-cropping, the potato farming revolution and soybean planting".

Farmers suffer from the advance loan
Our reporting partner pointed out that the labor service without payment, which is tasked to famers, adds a heavy burden for the farming collectives.

"How can farmers continue farming? They are frequently called on to carry out compulsory labor such as repairing roads and participating in social events. This means farmers are always busy with non-farming tasks. It means they are unable to concentrate on doing agricultural work within the farming collective."

How do farmers survive? How are they managing to acquire the necessary food and money?
Our partner explained as follows:

"The farming collectives are in heavy debt, having obtained loans from many places. Poor farmers have been borrowing money to buy food. But now they are up to their ears in debt. The government does not supply the necessary equipment for farming. So the farmers have to procure fertilizer through loans. If they borrow two kilograms of fertilizer, they have to pay back the debt by submitting one kilogram of rice in the autumn harvest time. Many farming families can't afford to send children to school because of the heavy debt they are incurring.
Farmers bemoan the difficulties of continuing to farm when they don't have food for a day. If they don't go to the farming collective, they will be sent to the Labor Training Troops (a correctional facility) as punishment." 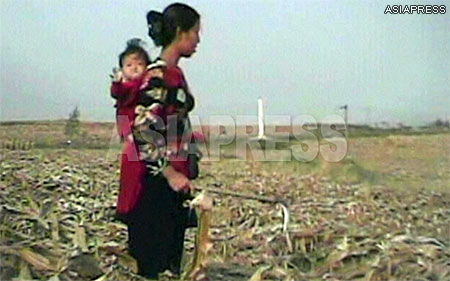 Signs of starvation in Hwanghae Provinces: The grain belt of the country
The Chinese staff of ASIAPRESS North Korea Reporting Team keeps in frequent contact with business traders who legally reside in China. According to information from several of these traders, the food shortage is becoming serious in the villages of both North and South Hwanghae Provinces, commonly known as the grain belt of North Korea, and there are cases of death from starvation reported.

The details of situation in Hwanghae Provinces are as yet unclear, but it is presumed that the food shortage was mainly caused by the compulsory rice requisition for the military and a food allocation to the citizens of Pyongyang. There is further information that some villages are gripped by starvation. In 2012, the series of government requisitions of food in the Hwanghae Provinces resulted in mass starvation.

The administration of Kim Jong-un repeatedly announced that the food issue is a priority for the country. However, in a situation where the food producers are suffering from heavy exploitation and plunder by the state, the food shortage will continue into this year. The international community should attend to the North Korean food situation.
***Rimjin-gang