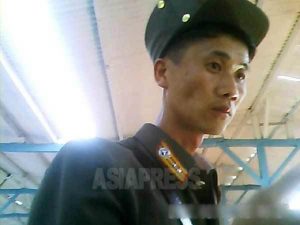 (Reference Photo) An emaciated officer of the Korean People’s Army has been shopping in the market. Taken at Hyesan City of Yanggang Province in August 2013. (ASIAPRESS)

◆Gasoline is 1.8 times more expensive than it is in Japan.

An ASIAPRESS investigation reveals that the price of fuel in North Korea has been sharply rising since the beginning of this year. (Kang Ji-won)

A reporting partner conducted the investigation across three locations in North Hamkyung and Yangang Provinces, from January 4 to 6.

According to our reporting partner, the cost of gasoline and diesel (1kg/KPW) is KPW 26,000 (KRW 3,200) and KPW 17,000 (KRW 1,500), the highest its been since the start of the economic sanctions on North Korea, in 2016. Gasoline, if converted to a liter system, has become 1.8 times more expensive than it is in Japan. The reporting partner told us, “There’s a rumor that the fuel will continue to rise.”

Sanctions resolution No. 2397 of UN Security Council set the export cap for refined oil products to North Korea at 500,000 barrels, on December 24, 2017. The cap meant a 90% decrease from that of 2016. However, it is becoming clear that illegal traders have filled the gap created by the international sanctions by cornering the market on fuel. 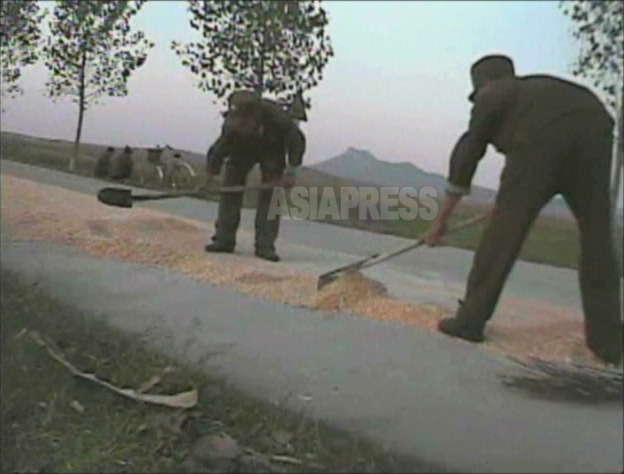 (Reference Photo) Soldiers spread corn for drying on a road. The corn was collected from a nearby farm. Taken by Shim Ui-chon at Kuail County of South Hwanghae Province in October 2008. (ASIAPRESS)

Our reporting partner described the impact of the sanctions on fuel prices as follows:

“Soldiers arrived at the collective farm for the quota of harvested military provisions. But as there was no fuel for their vehicle, an officer and two soldiers had to stay behind to guard them. (North Hamkyung Province).”

“Originally, staple foods were supposed to be delivered from the collective farm by the supply office vehicle of the brigade headquarters. But soldiers from battalion came and took the produce away using oxcart and charcoal engine vehicles. (Yanggang Province)”

There is no report on the rise of consumer prices at the market. 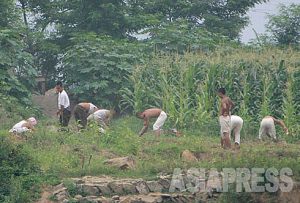 (Reference Photo) Soldiers are weeding a cornfield. Sakju County of North Pyongan Province. Taken in August 2007 from the Chinese side. (ASIAPRESS)

Facebook Twitter はてブ Pocket Feedly
RECOMMENDATIONS
The Real Coronavirus Situation in North Korea (Part 2): Kim Jong-un Criticizes His Country’s Poor Quarantine System
Turn the clock back about 7 months to when Kim Jong-un made startling ...
＜Kim Jong-un's visit to China＞ Behind the scenes of smuggling in North Korea
North Korea and China share two rivers as their border: The Amrok-gang...
Monetary Mystery: North Korean Won Withstands Sanctions, Suddenly Surging by 10%
On August 6, the exchange rate of the North Korean won against the US ...
＜Inside N. Korea＞ Missing Medicine: Country on Verge of "Medical System Collapse" due to Rapid Depletion and Blocked Imports of Drugs
◆In addition to the depletion of Chinese products, there is a ban on a...
N.Korean Drug Trade Spreads to Ordinary Citizens (PART1)
2015/Jan/12 Written by PAEK Chang-ryong, a defector reporterThe rapid ...
＜Inside N. Korea＞Poverty Forces Rural, Underage Women into Prostitution: Regime Responds with Rallies and Police Stings
◆ Dragged before a crowd to be condemned Authorities are stepping up a...
＜Interview with a North Korean woman (2) ＞ Flouting Hallyu Crackdown, N. Korean Teens Speak in S. Korean Dialect and Even Engage in ‘Sexting’
A whirlwind of massive ideological and cultural crackdowns targeting y...
＜Inside N. Korea＞ Regime Regulates Rice Prices as Pyongyang Residents Fear Inflation Rather Than Coronavirus
The Kim Jong-un regime’s decision to block the Chinese border to preve...
University Students Are Bored With Formal Uniforms - Women Wearing Shorter Skirts As A Sign of "Rebellion"
The Daily Life of North Koreans2014/April/16 Written by PAEK Chang-ryo...
＜Inside N. Korea＞ Penniless Protectors: Underfunded Orphanages Struggle to House N. Korea’s Homeless Children
It was not long ago when homeless children, known as ‘Kotjebi’, were a...