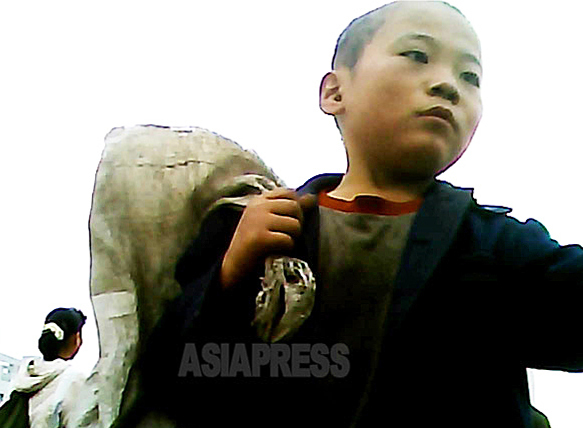 (Referenced picture) A boy carries a sack and wanders the streets. "His shaved head indicates that he may have escaped from an orphanage." Taken in Pyeongtaek, South Pyongan Province in September, 2013. (ASIAPRESS)

◆ Hungry children on the run
The economic downturn continues due to sanctions imposed by the UN Security Council. Unfortunately, with the loss of business, the number of people in need is increasing. In early August, we asked our partner, Kang Ji-won, about the situation in North Hamkyung Province and Yanggang Province.

- How about adults in need?
"There are a lot of old people in Chongjin City and Hoeryong City. They are forced to beg but people have become cold-hearted and almost nobody gives to them. There are people who pull carts during the day and sleep on them at night. They are no different from vagrants."

Our partner in Yanggang Province gave us the following description of the market.
"The young children held in the “secondary academy” escape immediately and come to the market. They escape because there they are only given a little bit of cornmeal and are hungry. There are so many hungry children, it’s unbearable. The number of children begging in the market is really increasing.”
Next page: Are the vagrant children being rounded up on Kim Jong-un’s orders?