■ “Nobody watches the news”

According to reporting partners, Chosun Central Television, the main state broadcaster, is aired weekdays and Saturdays from 3 p.m. to 10 p.m. and on Sundays from 9 a.m. to 10 p.m. News is aired from 5 p.m. to 8 p.m. and usually consists of political propaganda featuring the recordings of Kim Il-sung, Kim Jong-il, and Kim Jong-un. The channel also broadcasts animated programs for children and weather forecasts. 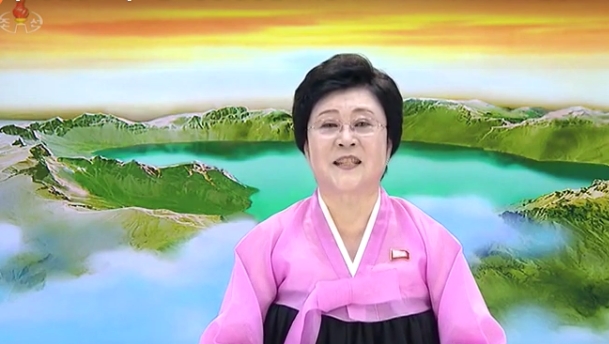 The famous North Korean news announcer, Li Chun-hi, who always wears a pink traditional hanbok. News broadcasts, however, are not said to be popular. Still taken from an original broadcast of North Korea’s Chosun Central Television.

According to a reporting partner, “People sometimes watch Central TV for cartoons or movies. No one tunes in to watch the news. It’s no fun, they just tell lies. It has been that way since way back when.”

The educational channel, “Ryongnamsan TV,” broadcasts programs about science and foreign languages. As with the previously mentioned, “Kaesong TV,” it used to only be broadcasted in Pyongyang and Kaesong.

The channel was branded as the “Chosun Education and Culture Television” in 1997 before being renamed to “Ryongnamsan TV” in 2012. According to the ChosunShinbo, a pro-North Korea website based in Japan, the “Ryongnamsan TV” channel is targeted at North Korean college students and is aired from 7 p.m. to 10 p.m. on Mondays, Wednesdays, and Fridays.

“Mansudae TV,” which has been aired nationwide since May 2016, broadcasts foreign films and special events, as well as coverage of incidents and events from around the world. It is said to be the most popular among North Korean viewers at present, though the channel only airs programming on the weekends.

Regarding the channel, a reporting partner said, “While watching the programming about incidents abroad, I try to see how advanced foreign countries are by their people’s clothing and so on. The channel also shows many old foreign films, which are the only movies officially recognized by the authorities. They are still fun to watch though. I would say it is the people’s favorite channel.”

Another channel is “Athletics TV,” a sports channel that began broadcasting in August 2015. It airs international competitions and sports-related programming. This channel also airs only on the weekends.
Next page :◆ Residents welcome introduction of multiple channels...

Next Page： ■ Residents welcome introduction of multiple channels
1 2 3
Facebook Twitter はてブ Pocket Feedly
RECOMMENDATIONS
Cows are the Property of the State - Severe Punishment For Unauthorized Slaughtering
The Daily Life of North Koreans2014/February/23 Written by PAEK Chang-...
Kim Jong-un Regime Fears Digital Resistance: less than 0.1% of N. Koreans Can Access the Internet (ISHIMARU Jiro)
Kicking down and shooting civilians- Myanmar's security forces have sh...
The Making of Rimjin-gang 〈03〉
The Making of Rimjin-gang The Making <01> <02> <03>...
Special Gifts For the Worker`s Party Congress “Not enough.”: Only Toothpaste Set & Liquor
The 7th Worker’s Party congress ended on May 9. Despite initial expec...
＜Inside N.Korea＞Strict Separation of Attendees for Worker`s Party Congress  Cell phone prohibited to keep itinerary confidential
“The 7thKorean Workers' Party congress,” is the biggest fair since the...
＜Inside N. Korea＞ “People are starving”: South to Send Support...But Will Food Reach Those Most in Need?
◆ Exploited citizens going hungry The World Food Program (WFP) and oth...