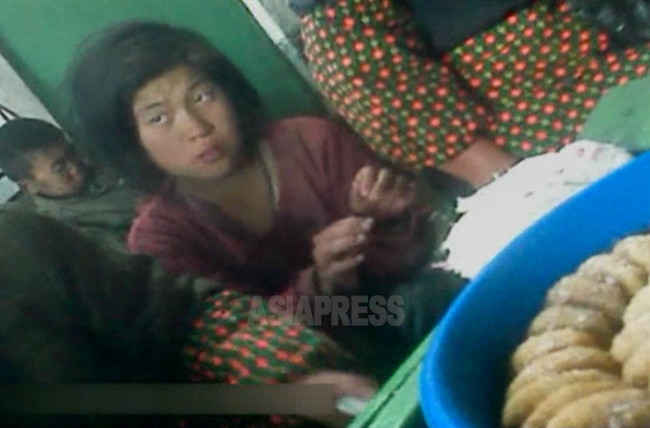 On February 15, the lockdown of Hyesan in Ryanggang Province, located along the border with China, was lifted. During the 18 days of the lockdown, markets were closed, and residents were forbidden from leaving their homes. The situation was so dire that deaths were reported due to lack of access to food and medicine. Closely following developments, ASIAPRESS conducted an emergency interview with two Hyesan residents. (Kang Ji-won / ISHIMARU Jiro)

Related Articlefa-arrow-circle-right ＜Emergency Interview on North Korea＞ A woman living in Hyesan City under lockdown, speaks in a painful voice: “If this continues, I will starve to death.”

Hyesan was placed in lockdown on January 29, but for reasons other than a coronavirus outbreak. According to sources, authorities informed the residents that the reason for the lockdown was due to continued smuggling and defections along the Chinese border. Authorities explained that Kim Jong-un had criticized Hyesan, saying that “the city is full of illegal activities,” before directly ordering for the lockdown. Hyesan had previously been put under a 20-day lockdown last November after a massive gold smuggling case was uncovered.

◆ “Four people have died in my neighbourhood.”

The first person we interviewed, is a man who lives in an apartment in the center of Hyesan with his family.

Q: Has anyone around you died during the lockdown?
A: There were at least four people who died in my neighbourhood. Two of them were elderly- they both died of tuberculosis. It was because they were malnourished and didn't have any medicine. The other two were a young man and a woman. They had chronic illnesses and ran out of the food due to the lockdown, resulting in their deaths. I was also scared that we might die if we ran out of food.

Q: What about funerals during the lockdown?
A: If a person were to die, their immediate family could take them to the crematorium after notifying the head of the local political unit, the police, and the secret police, and getting permission to leave their home. However, one bereaved family was complaining that they were asked to pay a bribe for this.

Q: How were sick people given treatment?
A: Doctors would make house calls if a chronic illness worsened or if treatment was urgently needed, but since the hospital had no medicine, the only thing the patients could do was to prepare their own intravenous drips. During the lockdown period, the hospital was opened with one or two people working in each department, but the only treatment they provided was first aid.

Q: What kind of supplies does North Korea need the most right now?
A: Medicine, definitely. People who were supposed to be treatable are dying and those who are sick are only getting worse because of the lack of medicine. This is due to trade with China being halted and medicine no longer coming in. I think about 60% of the elderly people in my neighbourhood have died since last August. This is a serious situation. In addition, due to the lack of medicine, people who specialize in folk remedies (such as acupuncture and moxibustion) have become so rich.

◆ A number of vagrant children have died

The next person we interviewed, is a single mother with two children, who lives in the center of the city as well.

Q: How did residents get food when they were banned from leaving their homes? Did the government provide them with any food?
A: Instead of distributing free food to the residents, state enterprises sold corn for 2,200 won/kilogram and white rice for 4,800 to 5,000 won/kilogram to their workers. The local government did not provide anything to residents. Therefore, those who did not have a job could not receive anything during the lockdown.
※1,000 North Korean won is worth about $0.14 USD

Q: What about people with no money?
A: About one week after the beginning of the lockdown, state companies provided 3-7kg of corn to workers from very poor families. This was to last one month. It was not enough at all, but even so, some people were able to receive it and some people were not, leading to some complaints. Many people were caught stealing at night because they had nothing to eat. Also, there were many incidents of people raiding private warehouses to steal firewood for heating.

Q: Were there people dying of hunger?
A: It seems that several 'kochebi' (vagrant children) died. At the time of the lockdown, the police officers gathered them up and put them in the Hyesan Hotel, but they did not provide them enough food and it was too cold...since the children do not have parents, people do not pay much attention to them.

I don't know exactly how many people died of hunger or disease during the lockdown. But there were definitely a lot of people who became malnourished. At the Hyesan Shoe Factory, there was a ceremony on the 16th, the day after the lockdown was lifted (a celebration to mark the day of Kim Jong-il's birth), but 30% of the workers did not show up for work. All of them were absent due to illness.

Facebook Twitter はてブ Pocket Feedly
RECOMMENDATIONS
＜Interview from Inside N. Korea＞ People are afraid of starvation if cities are locked down…PCR tests don’t exist…ASIAPRESS interviews a N. Korean to better understand the situation in the country and how people are feeling
North Korean state-run media has been reporting that the number of pe...
＜Inside N. Korea＞ Authorities Ordered to House More Homeless, Internal Documents State, as Economic Paralysis of Coronavirus Worsens
The economic decline in North Korea is getting more and more serious. ...
N.Korean State Demands Unconditional Loyalty To Kim Jong-un
2013/September/14 Written by KANG Ji-won, a defector reporterIt has be...
＜Inside N. Korea＞ Student absenteeism on the rise due to excessive requisition from school; a third of students are absent from school in local cities.
2016/Dec/19 Recently the number of student absenteeism has grown in l...
〈Photo Report 4〉Inspection At The Metro Station Entrance - "No Shabby Cloths, No Large Luggage!"
<Photo Report>- 4 Inspection At The Metro Station Entrance - "No...
N.Korea - The subway train in Pyongyang refuses the passengers with shabby clothes and luggage
https://youtu.be/bDilS-CkjDM ◎ASIAPRESS rimjingang YOUTUBE playlistRag...