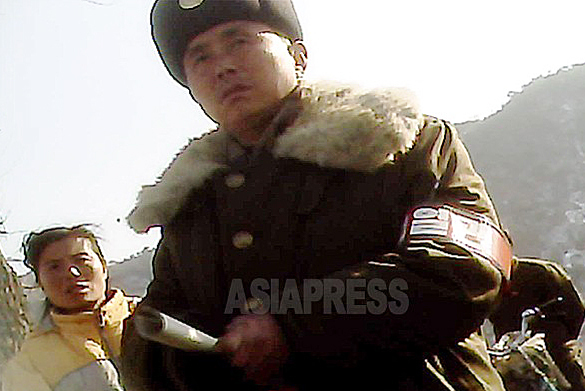 (Photo) Ministry of Security soldiers check luggage and passes at a checkpoint. Photo taken in the northern region on North Korea in October 2013 (ASIAPRESS).

There was an incident in the northern city of Hyesan, Ryanggang Province, where junior high school students were taken away from their classrooms in handcuffs for watching a foreign film. It seems that more than 20 people were detained and sentenced to heavy fines (Kang Ji-won).

◆ "It was an American film about sharks"

The incident occurred in November of 2021. Daily NK, a South Korean media outlet specializing in North Korean issues, first reported of the arrest of a junior high school student. After conducting an additional investigation at ASIAPRESS, it was discovered that the arrested students were 14-year old boys from Hyesan Middle School and that four law enforcement officers had entered their classroom during class, handcuffed them, and took them away.

Three members of the "Coalition Command for Non-Socialist and Anti-Socialist Sweeping Operations" and one social security officer (police officer) went to the school for arrest. As of the end of December, a total of 22 people, including those who distributed and sold the video as well as other middle school students, had been arrested in relation to the incident.

According to the investigation by several reporting partners living in Ryanggang Province, the students watched a "US film about sharks," possibly "The Meg," produced in 2018, or "Jaws," produced in the 1970s. Since the Chinese border has been closed to shut out coronavirus, the influx of new South Korean dramas has been suspended. As such, the students must have had to watch older films that were popular several years ago.

"In Hyesan City, information about this incident spread quickly, and no one is unaware of it. This is because the authorities decided to use the incident to set an example of punishing people for watching illegal videos and held seminars at institutions and companies to publicize the circumstances of the incident and the punishment."

This is what one of our reporting partners have informed us.

What was shocking was not only the fact that the junior high school students were taken away in handcuffs from their classroom but also that they were given heavy sentences so soon after their arrest. Another reporting partner informed told us the following:

"In addition to the students who were taken from inside the school, middle school students and adults who had only watched a few minutes were also arrested. According to the authorities, six of the 22 people arrested were sentenced to life imprisonment. Apparently, 'the policy of the crackdown is to arrest anyone who watches even a single scene.'"

It is not clear whether the heavily punished individuals were junior high school students or not. In North Korea, too, crimes committed by junior high school students are generally sent to a "Boy's Education Center" (juvenile training schools), so adults involved in the dissemination and sales of the film were likely the ones given heavy sentences.

The heavy punishment is probably the result of applying the “Law on the Elimination of Reactionary Thought and Culture." According to the law, "Those who directly watch or keep South Korean movies, videos, books, songs, pictures, or photos shall be sentenced to imprisonment for five to fifteen years, and those who cause the influx or dissemination of these materials shall be sentenced to life imprisonment or death." The law was enacted in December 2020.

One of our reporting partners commented on the shocking punishment as follows:

"I wonder how scared they are of information from the outside world to crack down so severely. I guess they think it will be easier to rule if they close the eyes and ears of the people. A lot of people are questioning why they are cracking down so hard on a movie they watched (about a giant shark) when there is nothing politically wrong with it."