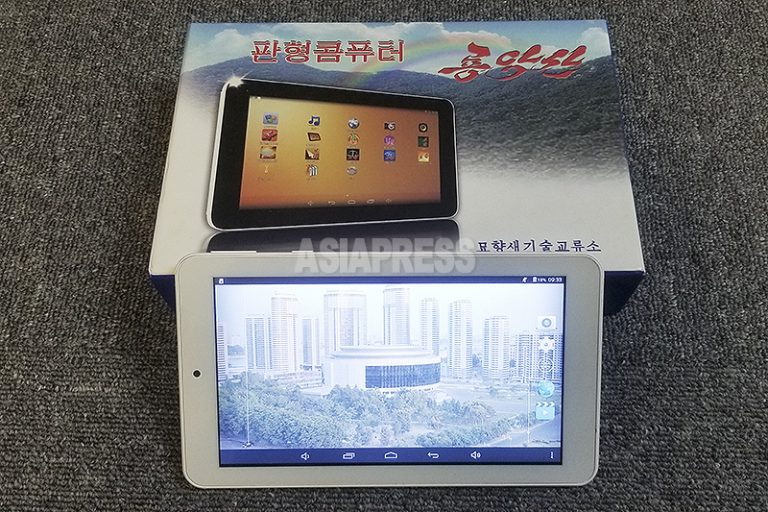 A tablet produced by the North Korean brand, ‘Ryongak Mountain’. Data can be transferred to and from the device using an SD card. (ASIAPRESS)

The reporting partner recalled an absurd incident that occurred in early October:

A woman in her 20’s who works at a shoe factory in front of Hyesan City theater was apprehended by the ‘disciplinary team’ for violating the dress code. During the stop, the inspecting officers demanded to see the contents of the woman’s phone to check for foreign dramas or other illegal media.

When the woman resisted and refused to provide her password, the officers threatened to drag the woman to the police station to show them the contents. What turned out to be on the phone, however, was not an illegal video, but rather a photograph of the woman in her underwear. Too ashamed to show the picture, the woman had resisted the officers’ orders.

Since the end of last year, when inter-Korean exchanges were still increasing, North Korean authorities have been strongly clamping down on the inflow of information from South Korea. As part of these extensive efforts, the authorities go so far as to stop people on the street to check their text messages.

The reporting partner explained, “It is not uncommon for the ‘secret groups’ to inspect text messages. They check messages for any South Korean-style words or abbreviations. For example, they look for the word ‘ty’, which stands for ‘thank you’. If they see words like this, the owner of the phone will be questioned under suspicion of watching South Korean films. So students and young people do their best to avoid these inspections and take the precaution of immediately deleting their text messages after reading them.” (Kang Ji-won)