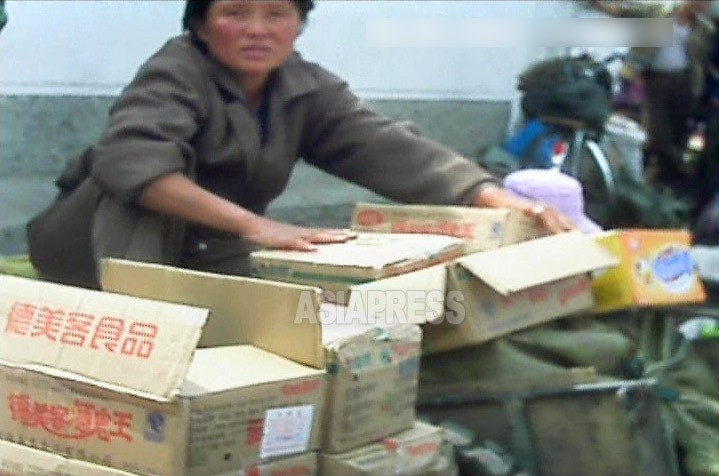 (file photo) A woman selling food from China at a market. Photographed by ASIAPRESS in October 2013 in Ryanggang Province

◆ Conflicts with the authorities over “non-refundable” goods

With the government’s “self-regenerative” efforts, food produced in local factories is distributed to state-run shops overseen by administrative commercial management offices. Market traders, in turn, visit the factories and state-run shops to directly buy goods wholesale. As there are no Chinese-made goods to compete with at the markets, the domestically-produced goods are said to be selling well.

With the recent fall in the quality of domestically-produced food, trust in North Korean food has reached a significant low. If consumers ask for refunds or exchanges, the commercial management offices only turn them away by saying, “There was no problem with the product at the time of sale.”

According to the reporting partner, “there is a regulation that all defective products must be disposed of and expired food used as feed for livestock. State-run stores, however, are secretly selling spoiled food to poor people at half-price. It is also said that more and more people are trying to sell home-made alcohol and discarded food. Expired bread, for example, is sold at 5,000-6,000 won per kilogram.”
※1,000 North Korean won is worth approximately 0.11 USD

1 2
Facebook Twitter はてブ Pocket Feedly
RECOMMENDATIONS
＜Breaking News From N. Korea＞ Tension Mounts as Regime Regulates Markets, Confiscates Stocks, and Slanders Price Gouging Shopkeepers
To prevent the spread of novel coronavirus to North Korea, the Kim Jon...
＜Inside N. Korea＞ Utterly Powerless: Residents Unhappy Living “Primitive Lives”, Receiving No Electricity for Last 6 Months
◆ Reduced precipitation leads to low hydroelectric power output A surv...
＜Photo Report on N.Korea＞ Latest Textbooks for N.Korean Middle & High School Students; Idolization of Kim Jong-un in all subjects
ASIA PRESS acquired 77 North Korean textbooks that are currently used...
＜Inside N. Korea＞North Korea implements special security measures ahead of Foundation Day
◆All entry into Pyongyang blocked off Reports indicate that, from Sept...
Rimjin-gang - Periodic Report(2011-Feb-09)
I am the chief editor publisher of Rimjin-gang, Ishimaru Jiro. The Rim...
＜Inside N. Korea＞ "Our expectations were foolish"...Trade Officials Disappointed by Breakdown at Hanoi Summit
◆It would have been better to threaten the U.S. than to have the summi...
＜Interview with N. Korean Residents (Part 2)＞ “The South did nothing for us”: North Koreans Blame Defectors and Moon for Destruction of Border Liaison Office
With the Kim Jong-un regime deciding to destroy the joint liaison offi...
＜Photo Report＞ Kotchebi, the Homeless, Under the Kim Jong-un Regime (PART3) A toddler–roaming around a city–represents the society. Kim Jong-un thoughtlessly enters orphanages without taking off shoes.
2016/Nov/4 The North Korean state-owned media has repeatedly broadcas...
＜Photo Report＞ People are exploited in mobilized labor (2) Recorded women’s complaining voices; “This is all free labor,” “Everything is taken by the high ranks”
The mobilized labor is performed by the unit of work place and school....
Elderly party members excluded from DPRK Party Conference… Increased surveillance of the population
A reporting partner of ASIA PRESS reported that the first recommendati...