2014/April/19
(This report first appeared in the Korean and Japanese edition of the ASIAPRESS
North Korea report in March 2014. All the information is from that report.)
Written by ISHIMARU Jiro
(All pictures were taken by our Chinese staff of the North Korea Reporting Team)

Hyesan is a northern border city of North Korea, and the capital of Ryanggang Province. In this part of North Korea the temperature can drop to -30C (= -22F) in midwinter. Across the Amrok-gang (Yalu River), opposite Hyesan, sits China's Changbai Korean Autonomous County of Jilin Province. Approaching the end of the March, parts of the usually thick ice covering the river has begun melting, which heralds the arrival of a late spring to this area. Local women again come to the middle of the frozen river to wash clothes in the freezing water. 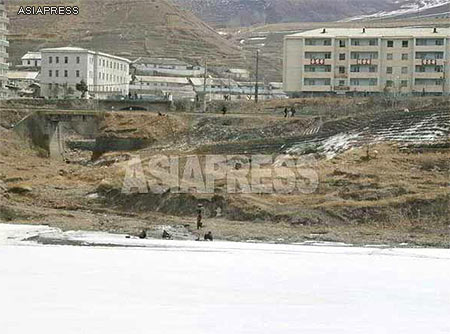 Wiyeon-dong of Hyesan City, viewed from Changbai, China. The five-floor apartment on the right is newly built, and the slogan hanging from the balcony reads "Happiness of the Leader", "Happiness of the Sun", and "Happiness of the General", which legitimize the three-generation power succession as happiness for the country and people. (Taken from Chinese side of the river. Changbai, Jilin. 21/March/2014)ASIAPRESS 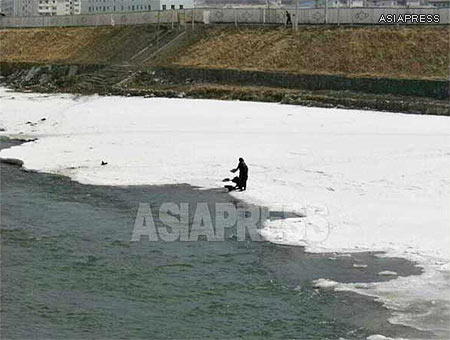 The river water of the Amrok-gang (Yalu River) is commonly used by local residents for washing and drinking. ASIAPRESS 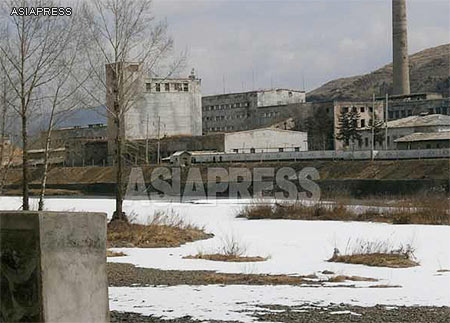 A North Korean factory built near the riverside in Hyesan. No wisps of smoke emerge from the aging chimney. ASIAPRESS 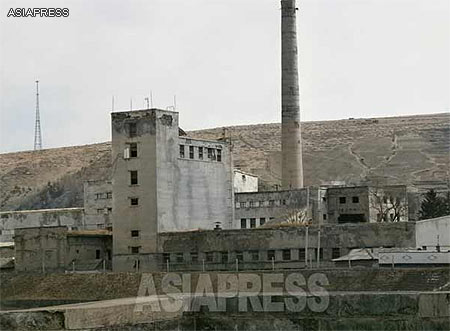 A run-down looking factory is without any signs of life. ASIAPRESS

Facebook Twitter はてブ Pocket Feedly
RECOMMENDATIONS
＜Inside N. Korea＞ Mourning Period for Kim Jong-il Extended Until Early Next Year as Young People are Instructed "not to laugh outside"
On the 10th year since the sudden death of Kim Jong-il on December 17,...
＜People’s Army Update＞ Soldiering Off: Bases on Lockdown and Annual Enlistment Delayed to Prevent Spread of Coronavirus
“Soldiers have all but disappeared from the streets” In mid-March, ASI...
N.Korea Food Shortage: Not a matter of absolute shortage, a matter of distribution and access -1
Not a matter of absolute shortage, a matter of distribution and access...
"I Want to Keep Reporting Till the Moment I Die"
2012/June/10 (Note: This message was written before the death of North...
＜Inside N. Korea＞ Cut Off: Border Town Faces Ruin After Flood Washes Away Bridge and Phone Lines
State media shows Kim Jong-un smiling in satisfaction with the recover...
＜Interview with a N. Korean Woman＞What do N. Koreans think about Kim Yo-jong’s speech?
During the speech she claimed that her brother “never slept despite a ...