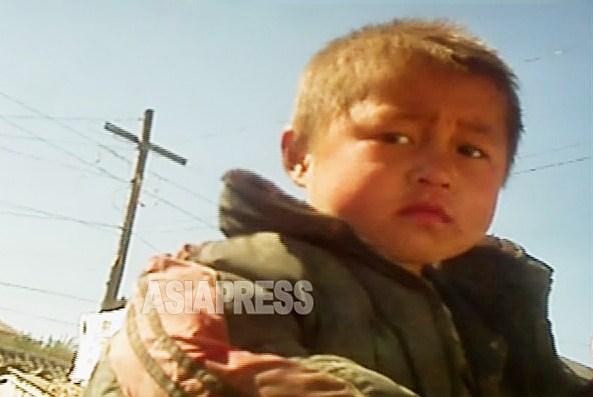 A boy wandering around a market and a housing area. He looks less than ten years old. He shortly said, “I don’t have parents.” His hair color has faded away. November 2012, in a suburb of Ryanggang Province (ASIAPRESS)

The North Korean state-owned media has repeatedly broadcasted Kim Jong-un visiting orphanages since the beginning of his regime in 2012.  He hugged a child and patted the head with a big smile.

However, there have also been footages where Kim Jong-un acts thoughtlessly during his visit to an orphanage: smoking a cigarette and entering an orphanage without taking off shoes along with other government officials.

A child “kotchebi,” the homeless roaming around a city, is the representation of the North Korean society.  Children become kotchebi after something unfortunate happened to their parents.
Related article: ＜Photo Report＞ Kotchebi, the Homeless, Under the Kim Jong-un Regime (PART2) Toddler worn out on a street while regime shows off luxury orphanages

Passersby on the street rarely pay attention to kotchebi.  They said “How can I sympathize with them when even my life is unbearable,” and “Since I have seen too many kotchebi, I am already used to it.” 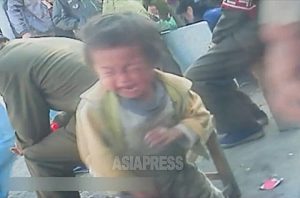 A toddler kotchebi crying hard outside a market. Someone said “I feel sorry for him,” but no one talked to him. November 2012, Hyesan City, Ryanggang Province. Taken by our Team ‘Mindeulle’ (ASIA PRESS) 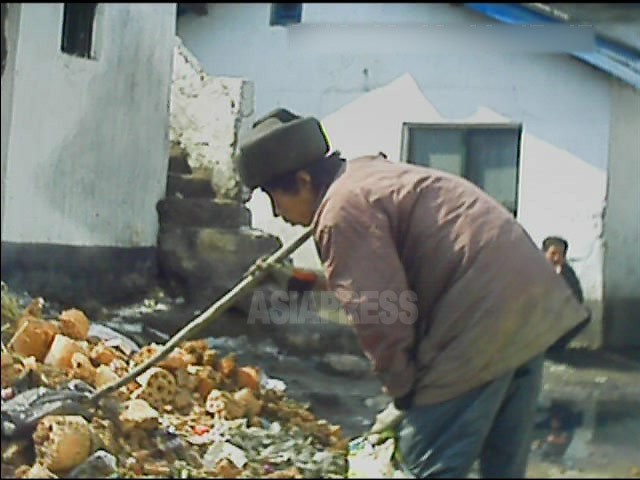 A male kotchebi looking for something useful at a garbage dump near an apartment. March 2013, in Pyongson City, South Pyongan Province(ASIAPRESS)

Related article: Kotchebi, the Homeless, Under the Kim Jong-un Regime (PART1) A girl and a boy–probably siblings–sleeping on a street 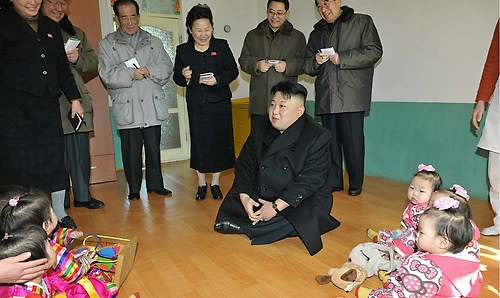 Kim Jong-un visited a newly established large-scale orphanage. He and other government officials thoughtlessly entered the room without taking off shoes. The picture was on the front page of RodongSinmun on 2 January 2015.

Facebook Twitter はてブ Pocket Feedly
RECOMMENDATIONS
[Video Report] Kim Jong-nam assassinated. What do N.Koreans think about it?
Kim Jong-nam was assassinated in February 2017 in Malaysia. Most of av...
The Making of Rimjin-gang 〈02〉
The Making of Rimjin-gang The Making <01> <02> <03>...
N.Korean People lament, “We’ll be done if Chinese enforce the sanctions”
2016/2/5The international community is calling for further sanctions o...
〈Photo Report- 6 (a)〉 The Government's Command is for a "Strong and Prosperous Nation" -- but Workers Tired Out at Pyongyang Construction Sites to Build 100,000 Apartments
2013/June/17 Report byGu Gwang-ho(Original report:Aug, 2011) In the ca...
＜Inside N.Korea＞ Farmers on collective farms starving to death
2017/Aug/24 There seems no prospect for the betterment of farmers str...
＜Latest Photo Report＞ Scenes of North Korea Captured by Super Telephoto Lens (1) Residents Replaced by Border Guards Along the Riverside [ISHIMARU Jiro]
It has been a year and a half since the Kim Jong-un regime closed the...