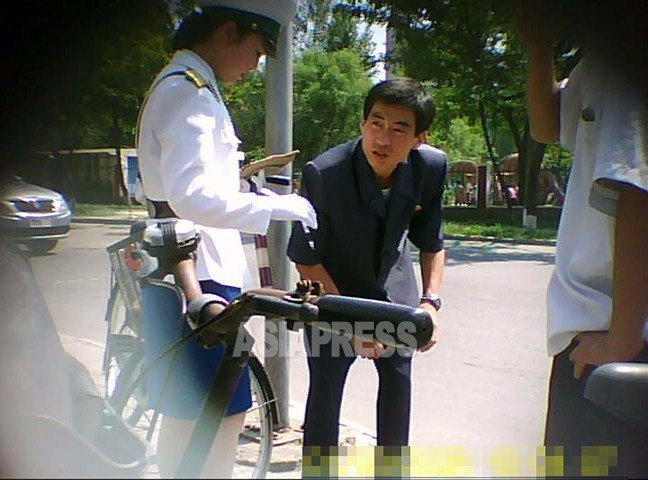 (Photo) A Pyongyang citizen, arrested by a female traffic officer for riding a bicycle illegally. Photographed in July 2011 by Koo Kwang-ho (ASIAPRESS)

For now, there is only one traffic signal in Hyesan, but perhaps there could be more needed in the future. According to a March 2018 report, large trucks frequently pass through the city to nearby copper mines and, as of last year, 35 taxis operate across the city. In addition, Chinese-made motorcycles have become more popular over the last 7 to 8 years, helping transport shoppers and their purchases.

As Hyesan has become more and more crowded with vehicles, traffic accidents have become an all-too familiar sight to residents. In October of last year, it was reported that a pregnant woman on a bicycle was hit by one of the trucks transporting copper from the mines and died as a result.

Reports indicate that, while the number of ‘Caterpillars’ has decreased after the introduction of the traffic signal, mobile checkpoints are on the rise. (Kang Ji-won / ISHIMARU Jiro)

※ASIAPRESS contacts partners in North Korea through mobile phones smuggled in from China.

1 2
Facebook Twitter はてブ Pocket Feedly
RECOMMENDATIONS
activities/distributions
THE OUTLINE OF ASIAPRESS INTERNATIONAL Title: ASIAPRESS International ...
● About Our Team - ASIAPRESS and Rimjin-gang
ASIAPRESS International ASIAPRESS started in Tokyo in 1987 as an indep...
＜Inside Report＞ Bad Reputation for Kim Jong-un’s wife, Ri Sol-ju, is spreading with an image of “Chick” who loves extravagance and splendor.
When asked about Kim Jong-un’s evaluation to North Koreans, their repl...
The Truth Behind N.Korea's Military Parades
2014/May/11 Written by PAEK Chang-ryong, a defector reporterParticipat...
＜Inside N. Korea＞ First-Rate Flop: “World Class” Tourist Magnet Repels Residents as Private Businesses Banned and Power Cut
On December 2, Kim Jong-un cut a ribbon at a ceremony to mark the comp...
＜Inside N. Korea＞ "Why did they kill him?" How residents feel about the recent shooting of residents escaping into China
Ten days have passed since North Korean soldiers shot and killed three...