This announcement states that “Any person or animal that enters our side of the Yalu and Tumen river bank will be fired upon without warning.” Taken in late August 2020 by ASIAPRESS.

In December of last year, a North Korean woman in her early 20s entered Japan. She had run away to China from her mountain village in the northern part of North Korea before the start of the pandemic, but was then arrested by the Chinese police and spent a year in detention. After that, she was just barely granted permission to enter Japan. Based on my own research, she is the first defector to have officially entered Japan since a North Korean man in his early 20s entered the country in late 2017.
Both defectors were allowed to enter Japan because they have Japanese relatives. The woman’s grandmother was born in Fukui Prefecture and married a Korean living in Japan before going to North Korea in 1961. In short, the grandmother was the “Japanese wife of a Korean.” The woman’s mother was born in North Korea in 1970.

In the man’s case, his mother was a Korean living in Japan who had been born in Tokyo. When she was an elementary school student in the late 1970s, the man’s mother moved with her family to North Korea. The Japanese government allows the entry of people who went to North Korea during the official “returning home period” along with their family members, regardless of their nationality status at the time. However, Japan does not have a settlement support program like that in South Korea, and North Koreans who enter the country receive support from the Korean Residents Union in Japan (Mindan) or other privately operated organizations.

The female defector settled in Osaka and is engaged in both her studies and working part-time. The male defector settled in Tokyo and, after graduating from high school, he got a job. His Japanese is almost perfect. I only hope that these two young defectors, who risked their lives to get to Japan, can lead successful lives in a society where they can decide their future for themselves.

The reality, however, is that most of the 200 or so defectors in Japan hide the fact that they came from North Korea. While part of this may be because they are afraid harm might come to their loved ones in North Korea, many are concerned that if people know where they are from, they could face discrimination, disadvantages, and suspicion that they are “spies.” The hate speech directed toward Koreans in Japan is also a factor that encourages them to hide their identities. 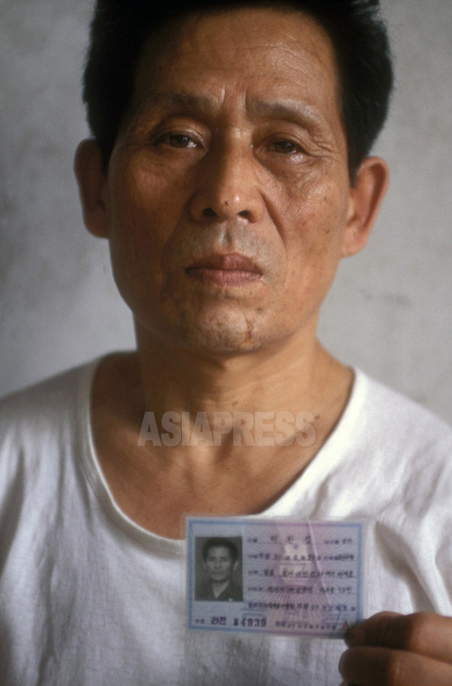 A photo of Ri Chang-seong, a Korean born in Japan’s Okayama Prefecture. He crossed over to North Korea in 1962, but then escaped into China after finding it impossible to live there. Taken by ISHIMARU Jiro in August 1999.

◆ N. Korean refugees will not come to Japan if a crisis erupts on the Korean Peninsula

However, there are politicians in Japan who claim that if there is a “crisis on the Korean Peninsula, one million North Korean refugees will swarm onto Japanese shores” or that “armed spies pretending to be refugees will come here.” In my view, these claims are completely ridiculous. Even if North Korea was to collapse - and even if there were North Koreans who tried to cross over to Japan by boat – this number would be more in the hundreds or thousands.

Most North Koreans would try to go to the much closer and safer South Korea, a country where they can understand the language. Or they would head to China, right across their country’s northern border. Those who cross over to Japan through treacherous seas would be only those who truly have the desire to come to Japan; in short, they would be the relatives of former residents of Japan.

While some refugees could float into Japanese waters by boat, given that most refugees would want to head to South Korea, all Japan would have to do is treat them respectfully before sending them on their way. It make sense that most refugees would want to go to South Korea given that finding safety would be their priority; that would be true even if they people with Japanese relatives. These people could then be allowed to enter Japan legally after going through the proper entry procedures at ports or in airports. There would be nothing to worry about. (End of series)

Born in Osaka in 1962, Ishimaru has made three trips into North Korea and 100 trips to the China-North Korea border region since 1993. He has interviewed over 1,000 North Koreans and maintains and develops a reporting network inside the country. His works include “North Korean Refugees,” “Kodansha,” “Jun Returns to North Korea,” and the “NHK Hi-Vision Special Feature.”