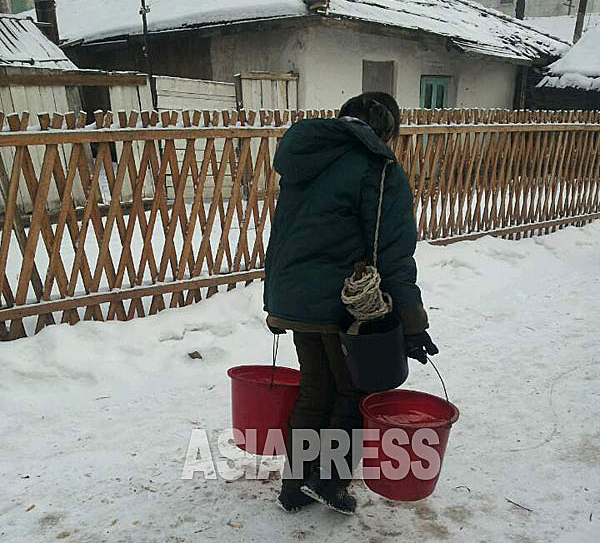 A woman carrying water home from a communal well. In order to preserve fuel, many people drink water without first boiling it. Photograph taken in central North Korea by "Mindulle", January 2015 (ASIAPRESS)

Our reporting partner believes the outbreak can be attributed to two things: 1) poorly purified tap water; and 2) river water that people, in an effort to preserve fuel, choose not to boil before consuming at home. In addition, many open-air restaurants serve unclean water and food, which has caused food poisoning and other epidemics in the past.

In October of last year, ASIAPRESS reported an outbreak of typhoid fever in Yanggang Province which resulted in several deaths. In September 2015, a separate report on the deterioration of Hoeryong City’s water quality highlighted the presence of carcinogens in the city’s tap water.

Typhoid fever is an infectious disease most commonly observed in underdeveloped countries. Although it is the responsibility of the state to provide clean drinking water for the health and well-being of the people, the regime's negligence has led to yearly outbreaks of disease across the country.