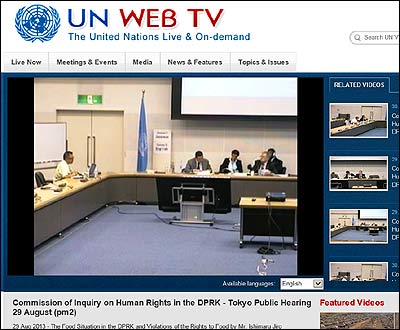 Further work of the Commission of Inquiry can been followed at:
http://www.ohchr.org/EN/HRBodies/HRC/CoIDPRK/Pages/CommissionInquiryonHRinDPRK.aspx

ISHIMARU Jiro
Ishimaru was born in 1962 in Osaka, Japan. He is the Osaka office representative for ASIAPRESS.
He studied abroad in Seoul for two and a half years and then in '93 traversed the entire 1400 kilometer China-North Korean border. He has made reports from inside North Korea three times, and has been to the border region more than eighty times. Up to now he has interviewed more than 800 North Koreans. Ishimaru is the publisher and chief editor of Rimjin-gang.

Facebook Twitter はてブ Pocket Feedly
RECOMMENDATIONS
＜Inside N.Korea＞Strict Separation of Attendees for Worker`s Party Congress  Cell phone prohibited to keep itinerary confidential
“The 7thKorean Workers' Party congress,” is the biggest fair since the...
Price is rising up due to a cornering sign of sanctions (ISHIMARU JIRO)
UN Security Council unanimously made a resolution to impose sanctions ...
＜Inside N. Korea＞Authorities Concerned as Starving Soldiers Brazenly Attack Farms and Homes to Steal Food
In North Korea, the harvest of corn, which is the country's staple fo...
Living in Pyongyang - The Real Story (2) Losing the Struggle to Survive Leads to Suicides and Homeless People
2013/August/09 Speaker： GU Gwang-ho,Rimjin-gang reporter Editors：ISHIM...
＜N. Korea Interview＞ “Nobody Knows, Nobody Cares”: Workers’ Party Official Surprised to Learn of Leader’s Surgery, Reports No Changes Within N. Korean Society
Information has been spreading around the world since April 21 of Kim ...
＜Inside N.Korea＞ Gasoline Price Plummets! Why?
ASIAPRESS has kept on surveying major comsumer prices of North Korea....