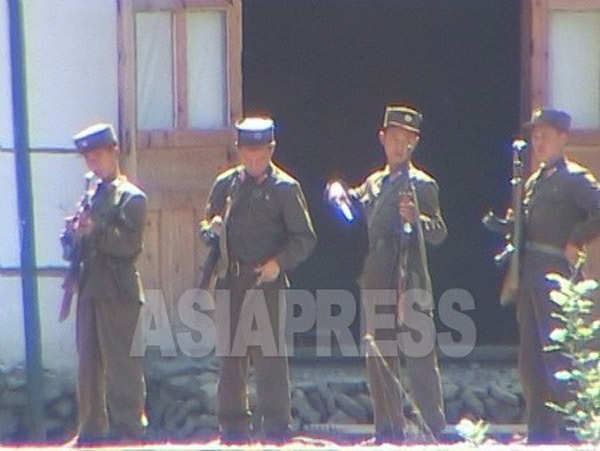 (Photo) Border guards training to maintain their guns. Taken from the Chinese side of the border in August 2004 by ISHIMARU Jiro. (ASIAPRESS)

◆With rivers frozen over, the poor try to escape

As the Kim Jong-un regime has tightened its control over the country in response to the COVID-19 pandemic, life for local residents has severely worsened. So much so, that several impoverished people have attempted to escape to China through the strict border security zone. While some have been arrested while fleeing, others have been shot and killed.  (Kang Ji-won)

According to multiple reporters living near the border of China, since the beginning of January, the number of people trying to leave the country has risen. This is because the border rivers (Yalu and Tumen) have frozen over, making it possible to cross on foot.

A reporting partner living by the border in Hyesan said the following, “Even though security is so tight, and bribes are no longer accepted, more and more people are trying to escape to China, one way or another. These people have run out of options and are at their wit’s end. Occasionally, I hear the sound of gunfire coming from near the river.”

On January 18, a family of three was arrested while attempting to escape through Kimhyŏngjik County, a short distance downstream from the city of Hyesan. The family was discovered when the sound of ice breaking was heard by guards on the banks of the river. According to sources, the family members were found in possession of opium, which they had apparently been intending to use to poison themselves in case they were caught. By the time the family was arrested, the man had taken the drug and was unconscious.

The reporting partner said, “I heard that one of them was bitten by a military dog and was in serious condition.”
In addition, during the same period, there was an incident in the Wiyoun area of Hyesan when a young military man who had been discharged from the military tried to cross the border into China and was caught after being fired upon with blanks by border guards. 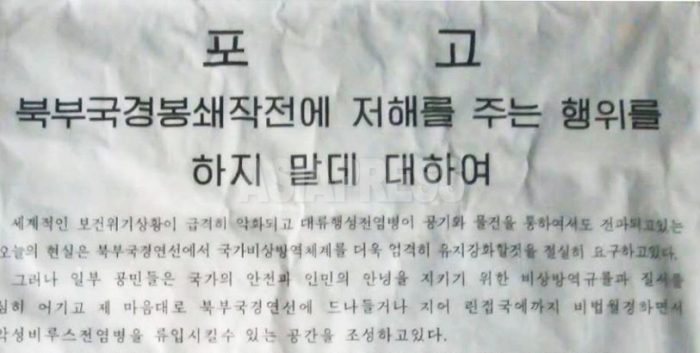 The text of the posted warning obtained by ASIAPRESS. It is titled, "No action shall be taken to impede the northern border blockade operation.” It explicitly states that border guards will shoot to kill. Photographed at the end of August 2020. (ASIAPRESS)

◆People are being shot and killed

It seems that there have been several incidents of would-be defectors being shot upon and killed by border guards. Another reporting partner who lives in Musan County, North Hamgyong Province, along the Tumen River, said, "On January 31, there was an incident in which a person was shot and killed by border guards while trying to escape to China.” The man was said to be carrying opium to kill himself in case he failed and got arrested.

Testimonies of gunshots being heard have also come from the other side of the river, in China. A Chinese reporting partner living on the opposite side of the river from Hyesan, in Changbai County, Jilin Province, explained the situation:

“Recently, at night we often hear the sound of gunfire coming from the North Korean side of the border. The Chinese side is also becoming stricter about smuggling and border crossings, and their security forces are increasing the number of checkpoints and conducting frequent patrols as well. Although North Korea claims that there are no coronavirus cases, we here believe that this is not true, and security has been tightened to prevent the influx of coronavirus from North Korea.”

In fact, the North Korean authorities have previously officially declared that they would shoot at anyone crossing the border into China. At the end of August last year, the North Korean authorities issued a proclamation in the name of the police, stating that they would “unconditionally shoot anyone approaching the border.” It also stated that there would be a night-time curfew in the border area, and that until March, people would not be allowed to go out after 6 p.m.

“A meeting of the neighborhood political unit was held on January 18 to discuss how to prevent people from crossing the border into China. The meeting was to instruct people to report to the authorities anyone who suddenly started spending a lot of money, who stopped socializing with their neighbors, who went out a lot for business reasons, who wanted to move, and who were in great financial difficulty.”

The reporting partner further explained, “Some people are trying to escape or commit suicide because they are being hounded by debt collectors, so we have been told that we have to report any suspicious behavior to the relevant authorities.”

In fact, more and more people are getting into debt due to the rapid deterioration of their lives. According to the reporting partner, “The debt collectors these days are really scary. They come to your house and take all your household goods, even your kettle. If a person is cornered to that degree, it’s understandable that they might consider defecting or committing suicide."

The authorities claim that they are trying to prevent people from defecting and committing suicide, but all they can do is tell them is “Don’t get into too much debt.”

Facebook Twitter はてブ Pocket Feedly
RECOMMENDATIONS
＜Inside N. Korea＞ First-Rate Flop: “World Class” Tourist Magnet Repels Residents as Private Businesses Banned and Power Cut
On December 2, Kim Jong-un cut a ribbon at a ceremony to mark the comp...
＜Inside N. Korea＞ More Elderly and Children Begging in the Streets…Girls at Greater Risk of Sexual Abuse
The population of vagrants, known as "kochebi," has been on the rise ...
＜Inside N. Korea＞ Not So Special: Kim Jong-un’s Unused Tourist Zone in Samjiyon is Falling Apart
More and more issues are plaguing Kim Jong-un’s priority project in R...
＜Inside N. Korea＞Authorities Concerned as Starving Soldiers Brazenly Attack Farms and Homes to Steal Food
In North Korea, the harvest of corn, which is the country's staple fo...
＜Photo Report＞ Priority on Construction of Guard Post To Prevent Defection-Not yet for flood victims (5 Photos)
2016/Nov/17 There was a huge damage on several cities and rural area ...
A glimpse into North Korea’s COVID-19 situation (1) The elderly and young are dying…The authorities determine infections using just temperature checks…Most people are recovering from their symptoms
It has been a month since the Kim Jong-un regime acknowledged an outbr...