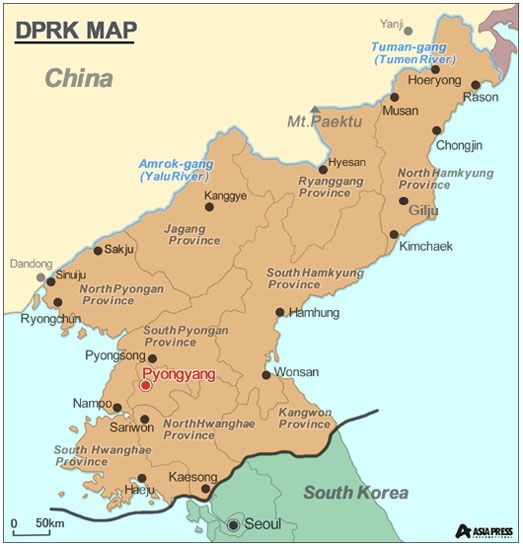 African ASF has also spread in the South and North Hamkyung Provinces, killing many pigs. A reporting partner investigated the situation in the Kimchaek, Gilju, and Hamhung areas.

At a cooperative farm in the Kimchaek region, all 8 pigs on the farm died. However, the meat was sold secretly.

Even in the urban area of Hamhung, ASF has spread through the suburbs, killing pigs being raised by individuals. However, state agencies, including quarantine centers, have not conducted any investigations nor done any prevention work in the area. When a pig falls victim to the virus, authorities are supposed to come to confiscate the dead animal. Breeders, though, are not reporting the deaths of their animals and are secretly butchering the pigs to sell. In Pyongyang, it is said that one can even obtain a permit for selling dead pigs by just paying $30 to a quarantine center.

In Hamhung, newly-wealthy investors, as well as individuals with freezers, are buying dead pigs for dirt cheap to preserve in freezers and sell secretly later. This supply is steadily decreasing however.

As police and quarantine officials are only inspecting for pork at road-side checkpoints, illegal pork vendors can easily hand over bribes to pass through. Even if officers catch someone transporting pork, they do not even ask where the pork is from or how the pig died.

The reporting partner who investigated in Hamhung said, “Residents have yet to understand the seriousness of ASF. As people cannot be infected, they believe it’s harmless. They think that if one of their pigs dies, it should be simply eaten or sold.”

The reporting partner continued, “People with a bit of knowledge on the matter try to raise their pigs in isolation but the best they can do to quarantine their animals is to cover the pens with wood. These people know that a lot of pigs have died, so even a little pig can be worth its weight in gold. As such, some are doing their best to raise their pigs indoors, in isolation.”

Exactly how many pigs in North Korea have died from the disease is unknown as the North Korean authorities do not publish such data. However, Seo Hoon, head of South Korea’s National Intelligence Service, recently reported to the National Assembly’s Intelligence Committee on September 24, that “ASF has spread throughout North Korea, totally killing off the pigs of North Pyongan Province.”

1 2 3
Facebook Twitter はてブ Pocket Feedly
RECOMMENDATIONS
"I Want to Keep Reporting Till the Moment I Die"
2012/June/10 (Note: This message was written before the death of North...
＜Inside N.Korea＞ Expansion of the market economy as the driving force behind social transformation--based on sources from inside N.Korea. (PART5) State-owned houses sold in the markets as the housing market established. by Jiro Ishimaru
2016/Dec/26 4 Property transactions in the black markets  4-1 State-o...
＜Field Report On N.Korea＞ Delayed Restoration of Flood Due to Cement Shortage (3 Photos)
2016/Oct/17 North Korean state media such as Rodong Shinmun report ev...
＜Inside N.Korea＞ Kim Jong-un’s popularity on the rise
North Korean leader Kim Jong-un’s popularity is on the rise, according...
Monetary Mystery: North Korean Won Withstands Sanctions, Suddenly Surging by 10%
On August 6, the exchange rate of the North Korean won against the US ...
Annual Compost Collection Mobilization Frustrates Population
2015/March/17 Report: Kim Dong-cheol, North Korean reporter, Rimjin-ga...
＜Inside N. Korea＞ Another year, another outbreak of Typhoid fever in the North
◆Outbreak caused by state negligence and unsanitary conditions Typhoid...
[Video Report] N.Korean Kids on the Battle of Life
North Korean kids were forced to enter the battle of life since the ‘a...
＜Inside N.Korea＞Strict Separation of Attendees for Worker`s Party Congress  Cell phone prohibited to keep itinerary confidential
“The 7th Korean Workers' Party congress,” is the biggest fair since th...
[Video Report] Wholesale Black Market Prospering with Prohibited Goods
The black market in North Korea–that was once small-scale and primitiv...