A mother and a son. He is wearing a very bright pink T-shirt with a design of Mickey Mouse. August 2013, Hyesan, Ryanggang Province. Taken by ASIAPRESS.

A girl wearing Mickey Mouse clothes is dancing in a family celebration. Perhaps, it was imported from China. Seemingly, they do not know that it’s an American character. 2007 fall, in North Hamkyung Province. Taken by Lee Joon (ASIAPRESS) 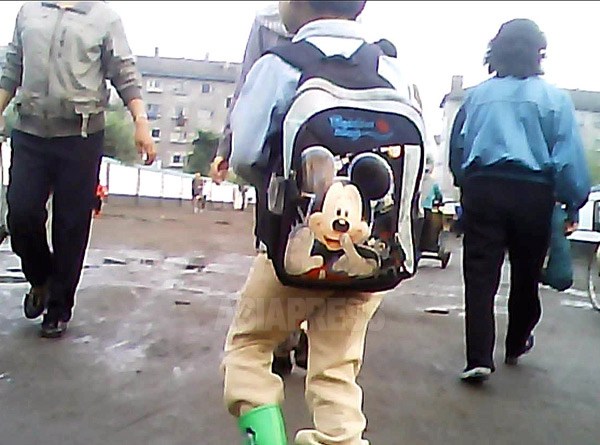 It is a Mickey Mouse bag. September 2013, in Chongjin City, North Hamkyung Province. Taken by ASIAPRESS.

【Related article】
◆ The Best Department Store in Pyongyang – But the Products on the Shelves are Not for Sale (1)
◆ Abandoned Elderly (PART2) Elderlies End up as the Homeless after Forsaken by the State and Family
◆  Female Soldiers in Miserable Conditions: Seven Years of Military Service Starting at 17 Years Old.