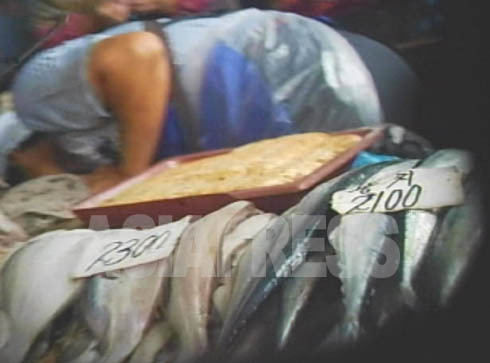 (Reference Photo) A stand selling fish at a market in Pyongyang. Flounders, squid and mackerel pike, caught only in the East Sea, are for sale. They seem to be fresh. Taken by Lee Joon in late August, 2007.

◆Squid for domestic consumption and smuggling?

Our ASIAPRESS reporting partner spoke with a North Korean wholesaler who buys squid from fishermen and sells them to fishery companies. The wholesaler explained, “There’s good money in squid. Many a people go to sea, during the season, to land a big catch. But, the catch wasn’t good this year. Fishery companies select squid according to the quality of the catch, and ship them in containers. The best are sold at RMB 75 (KRW 12,316) per kilo. The next grade down are sold for RMB 35-40 (KRW 5,700-6,580) per kilo and the rest go for RMB 25-30 (KRW 4,100-4,937) per a kg. The good ones are for the Chinese market, while the smaller ones, the size of your palm, are sold in the domestic markets. Now, though, good ones are also found in the domestic markets.”

It may mean that the damage being wrought be the international sanctions on the North Korean economy is compensated for by the domestic market. A businessperson who came to China from Pyongyang said, “Shrimp, crab and octopus were not sold in the domestic market before, but we can buy them now in Pyongyang.” DPRK Seafood, once sold almost exclusively in China, is now available throughout the North Korea.

A reporting partner in North Hamkyung Province reported a similar story: Seafood has noticeably increased in price in the markets. Meanwhile, some say that smuggling squid to China is likely toincrease in frequency. The reporting partner in Yanggang Province explained, “Squid are light, easily preserved and fetch a good price. They are perfect for smuggling. Smugglers may be targeting the lunar new year in China for optimal prices.” (ISHIMARU Jiro / Kang Ji-won)

(Reference Photo) Poor quality squid are for sale in a street stall. Taken by Lee Song-hee in Sadong District of Pyongyang, December 2008. (ASIAPRESS)