What about the North Korean side? According to an investigation conducted by reporting partners, smuggling is not carried out by individuals on a small scale, but by trading companies affiliated withstate agencies such as Samjiyon, Chonji, Yonsung and Reung La. Therefore, it can be said that "The ones leading the smuggling operations are state agencies". Smuggling takes place under the protection of the border guards and police stations.

"Although a number of trading companies had monopolized the smuggling business, the provincial trade bureaus have allowed the participation of companies that make payments to China, so the “donju”(wealthy class of merchants)have take part in smuggling under the guise of trading companies", the reporting partner explained. (Kang Ji-won / ISHIMARU Jiro) 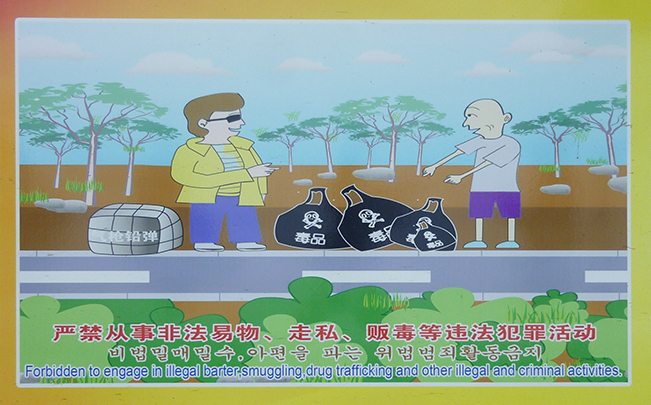 A sign set up by the Chinese public security authorities on the Amrok-gang (Yalu River) banks. The sign prohibits the smuggling and sale of drugs. Taken by ISHIMARU Jiro, July 2017

Values inside parentheses are percentage changes compared to the previous year / Unit: millions of USD / Source: Trade statistics of the General Administration of Customs of the People’s Republic of China